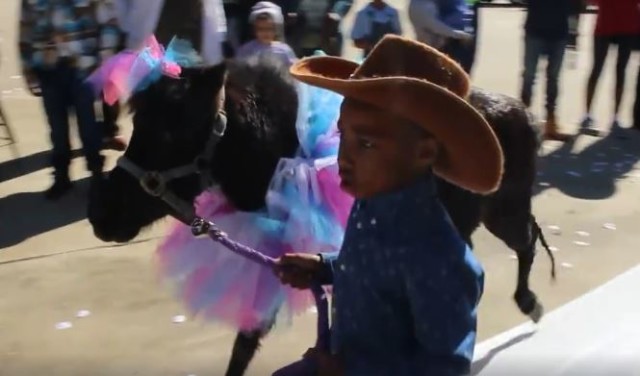 “You gotta get married before you have babies.”

Gabe Bush was recently informed by his grandfather, Richard Logan, Sr., that Gabe’s beloved pony Butterball was going to start having babies, and something about that didn’t sit right with this very conscientious 5-year-old.

In his traditional upbringing in the Baptist church, he was raised to believe that if you like it then you should put a ring on it, and his family seemed amenable to helping Gabe throw a proper wedding bash for Butterball and her pre-determined mate, Mr. Big Stuff.

When 5-year-old Gabe Bush heard his pony, Butterball, would soon be ready to have babies, he wanted to make sure she…

According to CNN, the wedding was open to the public and was held earlier this month at Elizabeth Full Gospel Baptist Church in Coushatta, Louisiana where Logan, Sr. is a minister. (He was also the wedding officiant between Butterball and Mr. Big Stuff.)

Gabe proudly walked Butterball in her pink, blue and white tutu down the aisle, and gave her away like a proper guardian. Mr. Big Stuff was also bedecked in a dandy tie. Butterball appeared to have some wedding jitters, as she almost wandered away during the big moment to snag some hay being used as wedding decor (a definitely downside of the more rustic styling that’s so en vogue these days).

We send our most heartfelt congratulations to Mr. and Mrs. Big Stuff on their nuptials, and an HN Salute of Adorableness to Mr. Gabe Bush.