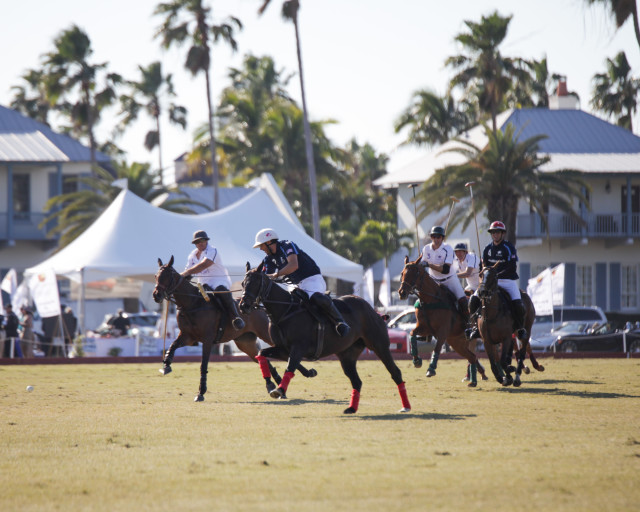 Each week, Ovation Riding and Horse Nation team up to spotlight an individual or organization doing good work in the horse world. This week, we recognize the Windsor Charity Polo Cup, using equestrian sport to fundraise for a number of worthy causes.

On Saturday, February 13th Windsor co-founder Hilary Weston and Salvatore Ferragamo co-hosted the 2016 Windsor Charity Polo Cup. International polo players including Captain on the English national team Luke Tomlinson and Magoo Laprida, Malcom Borwick, Augustin Merlos, Julio Arellano, Ruki Baillieu along with Salvatore Ferragamo and TV personality John Walsh competed in the match, which was led by Match Director Max Secunda. More than 1,200 people attended the event from around the world, including Windsor Members and their visiting family and friends; local area residents; seasonal visitors to the area and polo enthusiasts from nearby Palm Beach.

The match was a 6-6 tie between the two teams: Team Purple Reins captained by Salvatore Ferragamo and Team #CureAlzPark captained John Walsh.  John Walsh was named the Most Valuable Player and Best Playing Pony went to Lulu, played by Magoo Laprida.

In addition to a world-class polo match, which is recognized as the premier high-goal charity polo match of the season in Vero Beach, the day also included a themed tailgate competition judged by world renowned interior designer Thom Filicia (Tailgaters Love Hunters won that spirited competition), a junior player demonstration, a Porsche Concours, a specialty Retail Village and gourmet concession stands. More than 700 match attendees enjoyed an elegant field-side champagne luncheon, while others enjoyed picnicking in the festive field-side tailgating area or viewed the match from grandstand seating.  Steve Weagle, Chief Meteorologist for the Palm Beach NBC affiliate WPTV and a regular supporter of the biennial charity event, served as emcee for the second time.

Located alongside the polo field, the Retail Village, a new addition to this year’s event, featured a carefully curated selection of pop-up stores with products available for purchase with a portion of the proceeds donated to the event charities. Included in the Village were pieces from the Atelier line by Swarovski; gifts, fragrances and accessories designed by India Hicks; polo-inspired apparel by Stick & Ball; gift items from Selfridges; children’s clothing and toys by Lily Pad; and much more.