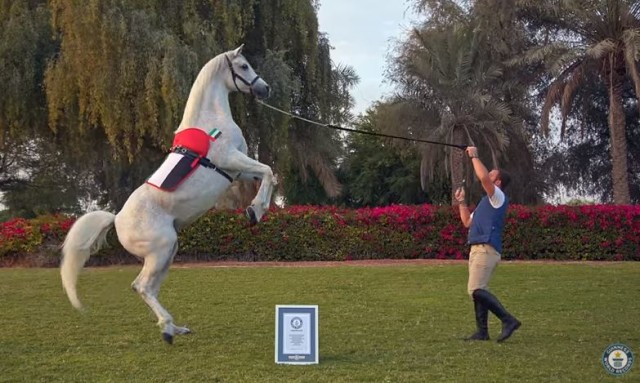 If you also have lots of questions about this, you are not alone.

The Guinness Book of World Records released a video yesterday announcing that “Desert Kismet” from the United Arab Emirates has broken the speed record for 10 meter hind leg walking. According to the video, Desert Kismet is a 16-year-old flea bitten gray gelding. He is owned by H. H. Sheikha Maryam bint Mohammed bin Rashed Al Maktoum, and trained by Rui De Sousa.

To break the record, the horse cannot be pushed, pulled, or otherwise physically coerced into performing the stunt, which he did in a lightning fast 9.21 seconds at the Dubai Polo and Equestrian Club last week.

According to an interview with Desert’s owner, Sheikha Maryam on Guinness’s site, the horse was gifted to the family last year, and had never been ridden before. But his trainer quickly discovered the gelding had some unusual talents and strengths, and worked toward some less conventional goals.

Desert Kismet and his owner, Sheikha Maryam. Screenshot via YouTube.

“He can perform exercises that are difficult for many horses to do such as walk long distances on his hind legs unassisted and perform pirouettes on his hind legs as well,” Maryam told Guinness. “These kinds of exercises require a combination of power, balance and extreme concentration. We are very proud of Desert Kismet for what he has achieved.”