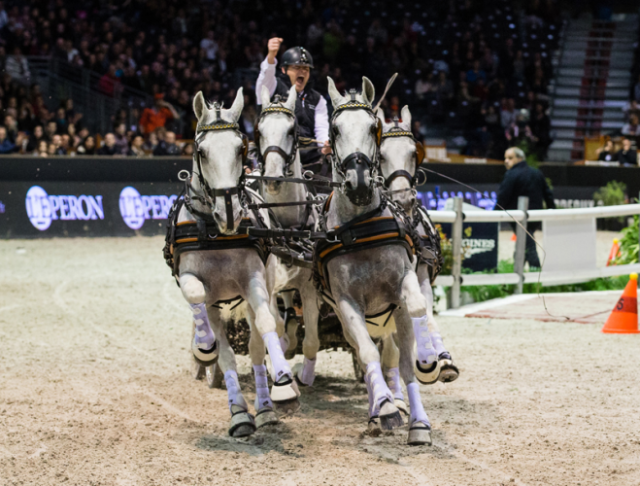 The Dutchman reclaimed the World Cup title that he hadn’t held since 2006 after an exciting final in Bordeaux, toppling six-time winner Boyd Exell.

The FEI World Cup Driving Final took place February 6 and 7, 2016 in Bordeaux, France, with the top drivers from the world indoor circuit competing. Drivers and their four-in-hand teams competed in a preliminary round just before midnight on the 6th and again in a second round on Sunday, carrying 50% of their penalties from the preliminary. The top three after the second round came back for the finals.

The favorite to win was undeniably Boyd Exell, who had claimed victory in five out of the seven legs of the World Cup series throughout the winter. However, after three exciting rounds down to the clock, it was Ijsbrand Chardon and his lovely Lipizzaners who took the cup.

de Ronde, first in the ring for the drive-off, picked up penalties with knocked hazards. Chardon’s clear, fast final round put him securely in first place, despite a near-miss when his back stepper, his son Bram, nearly slipped off the carriage before crossing the finish line. The pressure was on Exell, who knocked two hazards, giving the victory to Chardon.

Ijsbrand Chardon dedicated his win to his longtime sponsor Kees van Opstal, who had passed away one week prior at the age of 85.

Congratulations to Ijsbrand Chardon and his team! Go driving!