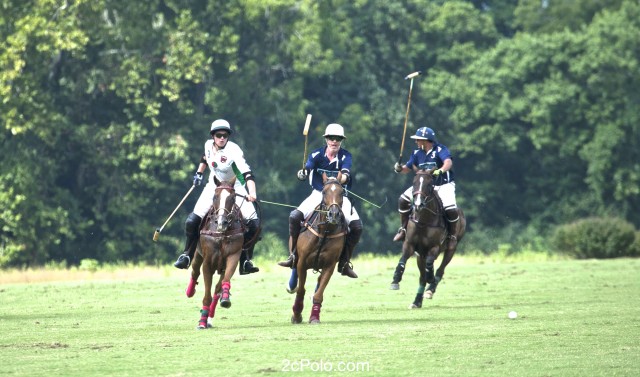 You can do anything if you believe. And practice.

Intrigued by Vanity Fair‘s August 2015 piece on cloned polo ponies, I dragged my husband to our local polo field. One thing led to another, and I found myself wanting to try polo. That experience, which I’ve detailed here, encouraged me to figure out how everyone got started in this game.

I couldn’t score a real polo ride, so I called Jan, my riding instructor, and told her that I wanted to try to hit a ball while on the back of a horse. I showed up at the barn with a ragged garage broom and a small rubber ball. My plan was just to try to hit the ball while riding. Jan handed me a croquet mallet duct-taped onto a PVC pipe — the spawn of her Yankee knowhow. It was “show time.” Tiny bats of nervousness surfaced as I committed to this insanity.

My fear was that I would tumble off the horse: I envisioned trotting around — forget about cantering — smacking the ball, while struggling to keep my balance. Once in motion, falling off was no longer in my mind, but hitting the tiny ball was. I felt ham-fisted awkward as I struggled to swing the heavy mallet. The ball seemed to shrink as I trotted past. My humbling first experience was mirrored by the people I interviewed.

I interviewed a few amateur polo enthusiasts: they all have “day jobs” and play for the sheer pleasure and thrill.

Tim Kyne (Tennessee) plunged into polo in his early 40’s. He is now 50ish. Tim had ridden trails and performed some jumping and dressage in his teens in Pennsylvania, but had not ridden in 25 years. “Holy Cow!  This is awesome!” was his reaction to watching his first match. “Polo combined all the best sports – lacrosse, hockey – all on horseback.”

For Tim, the word for the first lesson was anxiety. “Will I be any good? Will I stay on? Remember how to ride? Look like an idiot?” He found his seat, but the big surprise: “It’s harder than it looks. Hell of a lot more difficult — like playing golf on a horse.”

As with my own experience, Tim’s concern was, “Don’t hit the horse.”

Tim “hacked away at a walk/trot for three months.”  The next summer he participated in a chukker. “I just rode along. Every now and then I would try for the ball or actually hit the ball. I was klutzy, but it was exciting and fun.” Tim was exhilarated to see and feel progress. “I went from a walk, to trot, then canter. Then I tried to keep up. After one season I was keeping up.”

Tim discovered that “polo horses are like a dog after a squirrel — they WANT to go for the ball and will take after it on their own.  In the beginning you just stay with them and swing when you can. The horse will follow the direction of the ball faster than I can compute. He’s a teammate of a different species. I had to learn his language. Yet, polo seems to be natural for them. They are used to running in a group and bumping and competition.”

Amanda Uechi Ronan (Texas) writes the “polo beat” for Horse Nation. Amanda was an experienced rider (cross country, western performance, dressage …) in Houston when she took her first lesson in March 2015. She braved her first tournament that November. “Polo, without a doubt, is my number one equestrian discipline.”

When handed the mallet, Amanda thought:  “It felt soooo heavy. After just a few swings my arm was about to fall off and I could no longer feel my thumb.” The hardest thing was “making contact with the ball.” As I did, Amanda found herself “swinging too high, too low, too close to the horse, too far from the ball. The ball just sat there — undisturbed.” Yet, she was hooked. “It was gloriously fun. I didn’t expect it to be so fun hitting a ball through some cones.”

Jamey and his daughter Kelsy. Photo courtesy of Daniel Chiaro and Chiarofoto.

Jamey Parker plays with the Nashville Polo Club. He had only been on a horse a couple of times before he attempted polo in his mid-30s. He was drawn by the “anticipation of the unknown. What would happen?” He soared with the feeling of freedom. What does Jamey feel when he trots into the arena? “Butterflies. I want to perform well for my team, but I really don’t want to get hurt. I have a wife and daughter depending on me.” Taking a field ball square on the nose did hurt – a lot. In spite of the broken nose, “I love the speed.” Jamey said he feels “moments of sheer terror, but it all works. Like Nike, ‘Just do it.’”

James Armstrong is a polo instructor in Nashville. Polo newbies who think they can ride will find that polo riding doesn’t translate from weekend pleasure riding. Competitive riders are “leaps and bounds ahead” because of their drive and riding savvy.

James gets a lot of non-riders fascinated by “the danger and speed.” But, “polo is a team and contact sport — like football.” A player relies on her teammates to work in concert. James notes that “polo is a sport where men and women can play together.”

And kicks aren’t just for kids. James has players in their 60’s and 70’s. He advises that you need the will to succeed, to have goals, be disciplined and love a challenge.

Do I plan to take up polo at 60ish? No. Will I try a few lessons or, at least, go back to Jan’s with a used polo mallet and show that ball who’s boss? Darn right.