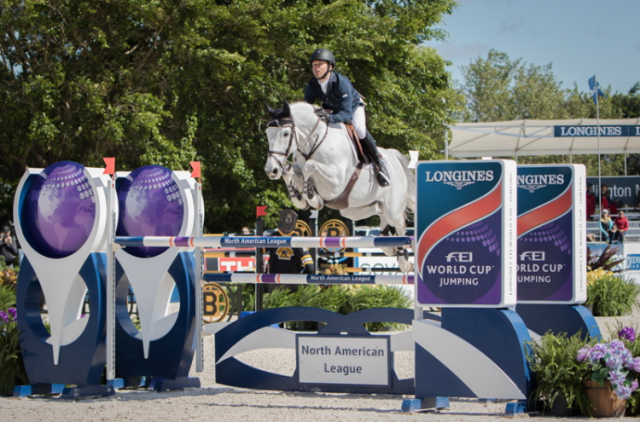 Deeridge Farm of Wellington, Florida hosted the first-ever Wellington Masters event on Sunday, February 7, welcoming 40 international show jumpers to the rarely-public venue. Originally slated to run in the grass ring, poor weather forced the FEI World Cup Jumping North American League leg to move to the sand ring. As Kent Farrington of the United States had selected his mount Uceko specifically for his strength on grass, this change of scenery wasn’t necessarily conducive to his plans.

“He usually goes best with a really impressive ring, or in an intimidating setting for most horses, and this is usually where he shines so that’s why I try to pick spookier venues or grass arenas that have bigger, impressive jumps,” Farrington stated in an FEI press release. “It wasn’t really playing to his strengths today, but he pulled it off anyway, so I’m really happy with him.”

See for yourself how Farrington and Uceko make it look easy:

Riders gave much credit to the owners and staff of Deeridge Farm and the Wellington Masters, who had to make some tough calls thanks to the weather in the inaugural running of the event. The top-notch facilities were applauded for great footing and professional atmosphere.