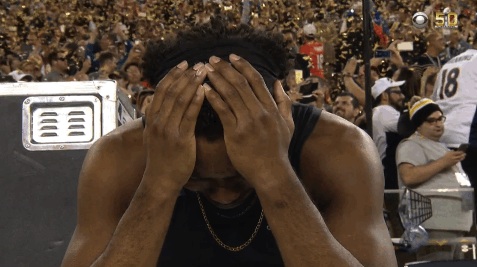 Best of Craigslist is back with another tear-inducing roundup of terrible ads.

Ah, Craigslist — you evoke all sorts of emotions in us. These ads remind you that when you can’t decide whether to laugh or cry, just laugh. It’s easier.

We’ll kick things off with this “calm cool a collective” horse from Kristy:

I have a Percheron horse which will be 2 March 5 2016. He is a sound horse with good training and is very smart. Temperament wise he is a very cool calm a collective kind he is a pocket horse. Easy to catch. I have broke him without a bit so to each his own. I assume with as big as they get you might have to.

Overall, this ad isn’t bad, and credit to the sellers who are raising money to geld the sire. But there’s a certain misspelling that raises an eyebrow and a good chuckle. From Lisa:

I have a Quarter mile horse for sale, 7 year old (Female), registered with “American Quarter Horse Association”, horse Comes with Certificate of Registration. She is broke to ride, but I haven’t ride her for about a year.

The new tactic in tack sales seems to be melodrama. From Maddie:

This horse is obviously a saint and needs to be purchased right now. Look — she goes great in a snaffle… sort of. From Maria:

I am selling my female horse, she is trained to be ridden on , she is about 5 years old. I an not sure about the breed but I was told she is a Quarter horse Asking $1,300.

Rounding out the collection today, we had to do some serious sleuthing to discover that this is not, in fact, a scam. Aren’t you pleased to know that this is actually a real horse and he really is standing at stud? From Lori:

Can you say Tipple Crown? This is Empire of d’Nile , He is the “PATERNAL” { same Dad} 1/2 brother to the Grand Slam Winner &, Haskell Winner, American Pharaoh.
Both sired by the amazing “Pioneer of the Nile’ who won 4 Graded stakes races in a row, Including the Santa Anita Derby.

WE all know he would have won the KY Derby but I guess they forgot that day to Mine that bird that day. Pioneer of the Nile Blood line continues to make winner after winner. Next year if you want Pioneer of the Nile blood, Break out the Big DADDY Check Book He’s 125K….American Pharaoh is 200K Even Grandpa is big bucks Empire Maker is a Hundie {100K}… Cool if you own a small island but if you still want to play and have a shot at your derby dream then You want to swoop in on the Only son of PON in CA and for 2016 Early Breeding. We are accepting a limited number of mare applications for VIP status.

Every body know the mare is key in any breeding, and Empire of D’Nile came out of a Stakes Producing mare named Beauty school who has 6 figure winner names Lash Lash lash and her latest success is full sister to Star “All Joya.” Opportunity is knocking, Internationally or keep it Domestic. Either way this colt could bring your dreams into reality. Priced to make you believe dreams can come true and make a bet on your destiny. Bring your Best Mare and if approved We Just might Comp you VIP Style.

Readers, if you run across an “interesting” ad in your Internet wanderings, send it our way! Email the link to [email protected] Who knows – maybe you’ll help connect a horse with a safe, loving home. Go Riding.