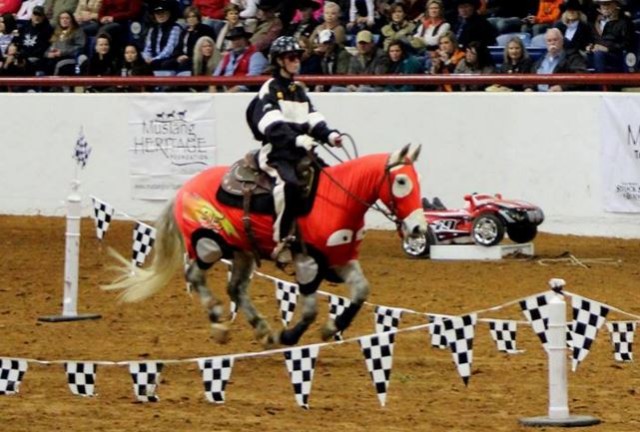 From trick riders to cars to marvelous hunter jumpers, the top five was a diverse crowd! Check out the videos from the 2016 Mustang Magic.

Mustang Magic is produced by the Mustang Heritage Foundation and includes invited top-placed trainers from past Extreme Mustang Makeovers. This year’s Mustang Magic in Fort Worth on January 21-23, 2016 was another incredible performance in the books, and the trainers pulled out all the stops to win the top prize and get their lovely challenge horses adopted. Below are the freestyle performances of the top 5 finishers!

Wylene is a Mustang Magic regular, and we were stoked to see her bring her talents back with this scrappy darling mare. Shockingly, the winning horse was adopted for the unbelievable auction bid of $1,700.

Reserve Champion: Ginger Duke and Been There, Dun That

Ginger is also a returning Mustang Magic trainer, and possibly one of the most talented trick riders in the business. She teaches her mustangs to do the most impossibly brave things! And the Texas crowd obviously knew it, because Been There Dun That was the highest selling horse at the event with the winning bid of $7,000.

Shelby and “White Lightning”, a six-year-old Salt Wells Wyoming mare, certainly had their work cut out for them competing against some extremely seasoned professionals, but the pair put on a flashy and steady performance to come in third with their “Cars” themed-performance! (White Lightning was adopted for the winning bid of $1,600.)

Cavin Graham hit the flashy horse jackpot with his red roan mare from Pancake Nevada, and then added a few months of top training, to boot. Yet another really impressive horse who was adopted at a stealing bargain of $1,700.  Also, can we give a Horse Nation salute for his absolutely genius, lightweight and acceptably scary PVC props? (WHICH HE NAVIGATED BRIDLELESS IN FRONT OF A SOLD OUT CROWD.) Someday I will have a Cavin Graham mustang.

Three Cheers for the top finishing english rider! Jessica completed many of the preliminary events in her english duds, and her freestyle embodied a nicely working english hunter. This mare out of Cedar Mountain, UT was adopted for just $1,100.

The Mustang Magic event in Forth Worth, Texas, is one of many events around the country where you can adopt a fully saddle trained mustang ready to start a new life. For more information, visit the Mustang Heritage Foundation’s website or Follow the Extreme Mustang Makeover on Facebook.

Many thanks to Dusty Jeans Ranch for help procuring video, and Shelby Rosholt and photographer Lynn Ciavarini for the lead photo.