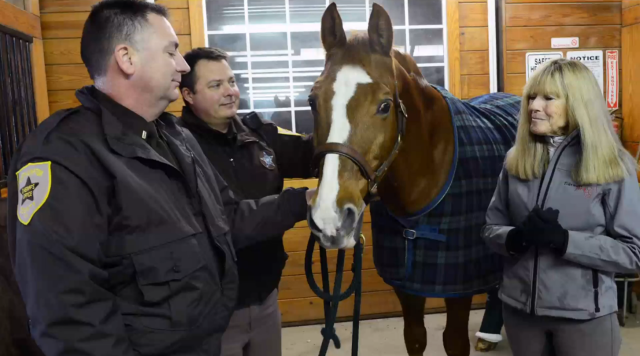 Finding a horse cast in a stall is every horse owners’s worst nightmare. Fortunately for former Grand Prix dressage horse Jonquille, the first two deputy responders on the scene were lifelong horsemen.

While many first-responder units may undergo basic livestock-handling training to aid with horses and other animals in emergency situations (with organizations such as the Technical Large Animal Emergency Rescue working hard to educate teams), having horse-friendly law enforcement or rescue personnel on the scene is often a rare luxury. However, one lucky former Grand Prix dressage champion named Jonquille is alive and happy today thanks to the timely arrival of two local deputies who just happened to be lifelong horsemen.

The 25-year-old gelding, owned by Susie Cain, managed to get himself cast on Friday, January 22; he was discovered trapped on his back by a barn assistant at the Virginia farm where he’s boarded. To make matters worse, Jonquille had also gotten his left hind hoof stuck between the metal bars of his stall wall. Farm owner Maureen Lawrence and Cain attempted to free his hoof but realized that the horse was well and truly trapped. They called two veterinarians as well as 911 — time is of the essence when a horse is trapped cast.

Within minutes, two local deputies arrived: A.J. Ferebee, a lifelong horse owner, and Chris Forbes, who grew up on a horse farm. Volunteer fire department members were close behind, but Ferebee and Forbes took the lead as Lawrence sedated Jonquille to make the rescue process easier.

Ferebee and Forbes explain the process in this video via Delmarva Now news:

Thanks to the horsemanship knowledge of these fast-acting deputies, Jonquille escaped major injury from what could have been a life-ending accident. While Ferebee and Forbes treated this incident like “just another day on the job,” their horse experience and quick response time clearly made a huge difference in the life of Jonquille and his connections.

[Northampton deputies help to right an upside down horse]