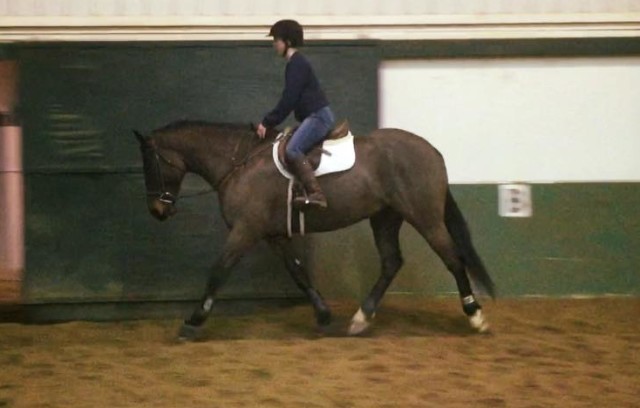 Collegiate blogger Haley Ruffner describes a recent challenging ride on a friend’s horse that tested her abilities to adapt as a horseman.

Arguably the most difficult aspect of riding in the Intercollegiate Horse Show Association, or IHSA, is adapting to each different horse you ride in practice or draw at a show. Even having ridden the Alfred University horses for the past five years as both a high school and now college equestrian, I still learn something new about them each ride.

Most of my coaches have emphasized “getting the feel” of your mount in the few moments you have between getting on and entering the show pen — how much leg do you need to use? Does your horse prefer a soft hand, or do you need to be more assertive? Is he spur broke, does he get antsy if you use any leg at all, does he snap at other nearby horses? Much of this can be determined from watching warm-ups and previous classes, but there is no alternative to actually sitting on the horse and feeling his barrel between your legs and his mouth on the end of your reins.

Last semester, one of my teammates rode my horse, Cricket, for the first time. In short, he operates with very little leg, soft hands, and a lot of seat and voice. My teammate, being primarily used to riding her own fancy (though slightly lazy) jumper, tended towards squeezing with her calves and rising out of the saddle at the canter. The combination of two very different disciplines and riding styles confused both of them and resulted in a rather hilarious learning experience for both horse and rider — a dramatic example of what IHSA riders endure every time they draw a new horse at a show.

To her, stopping was a drawn-out “whoaaaaaa” and pulling on the reins, while my horse was used to a short, firm “whoa,” deep seat, and calves away from his sides. In true IHSA fashion, they were both excellent sports and figured each other out within a few minutes with no casualties and little embarrassment.

This week, the tables were turned and my teammate let me ride her own personal horse, the aforementioned fancy jumper. I can now say that I fully appreciate her struggle to figure Cricket out — I struggled as much (if not more) in my ride on her horse. She warmed him up and explained to me how I should ride him — soft hands, bend him away from the scary end of the arena, lots of constant leg and keep his stride contained to avoid him stepping on himself.

It seemed simple enough until I actually had to do all of those things at once, and stay cantering, and try to maintain some semblance of equitation. To Berkeley, “whoa” means “whoa,” but so does “good boy!”; sometimes passing the side door also means “whoa.” He was wiggly everywhere Cricket tracks straight and let me know exactly when I wasn’t riding him correctly.

My ride on Berkeley was strictly for fun and had no connection to my IHSA practices, but I think I learned more from that ride than I did from the parade of western horses I rode this week. His differences from what I am used to, drastic as they are, will remind me to be more sensitive even on the western horses, who are all fairly similar. Not all horses will tell you when you’re wrong as dramatically as Berkeley and Cricket do, but nevertheless it’s just as important to listen to your horse as it is for him to listen to you.