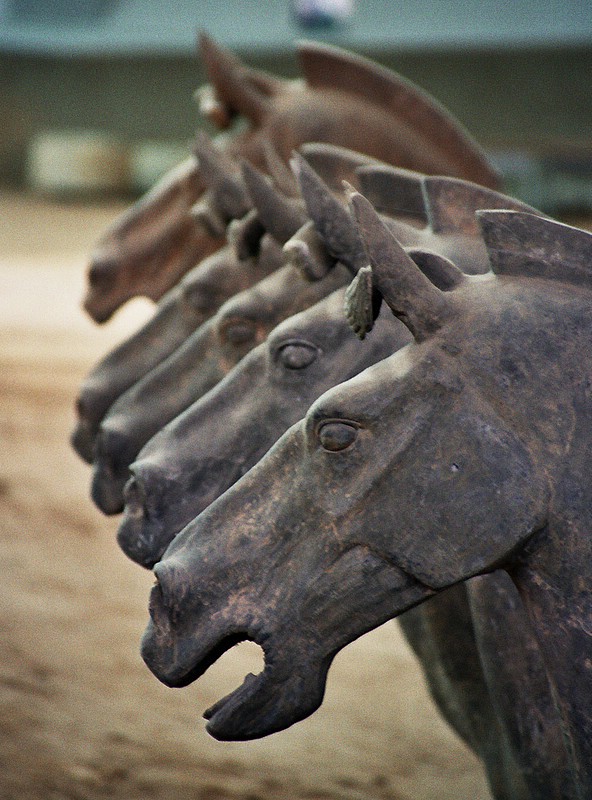 Shya Beth delves into the history of this iconic excavation.

Recognized today as one of the most important archaeological excavations of the twentieth century and noted as one of the top ten attractions in China with thousands of visitors coming every year, the Terracotta Army and Horses is a definite “must see” for any equine enthusiast who is interested in seeing horses in art and history. This is one of the largest and most unique military museums in China.

History of the Terracotta Army

The Terracotta Army is the buried army of Emperor Qin Shihuang, the First Emperor of China, guarding the tomb of the Emperor in his afterlife and accompanying him in his immortality. Representing the Qin Dynasty (211-206 BC) military power, these thousands of life-size figures arranged in a large-scale battle formation are impressive by their size, number and detail. Today, over 8,000 soldiers, 130 chariots with 520 horses and 150 cavalry horses can be seen in the site, making it one of the most famous attractions of China together with the Great Wall or the Forbidden City. First discovered in 1974, the site has been ranked as a UNESCO World Heritage Site.

Emperor Qin Shi Huang, the first Emperor of China, ascended to the throne at age 13. He was the most famous Emperor in China’s history, since he was the one who unified China 2,200 years ago and gave to the country its actual name. Qin Shihuang was responsible for the creation of many of China’s outstanding buildings such as the Great Wall and the Summer Palace as well as the Terracotta Army and Horses. The army was built with the purpose of protecting the tomb of the Emperor and show loyalty to him after his death. The Terracotta Army and Horses site was under construction for 38 years, and around 700, 000 workers were needed to complete it. Apart from the terracotta figures, many buried treasures and sacrificial objects, animals and people accompanied the Emperor in his afterlife.

In 1974, the Army was discovered quite by accident. A farmer was digging a new well on his farm and discovered a terracotta head looking like a human face painted in very bright colors and brought it back to show his family. They were curious about the head so they contacted the officials about the discovery and brought them to the place they had found it. That soon led to archaeologists and officials realizing that they had found the legendary Terracotta Army and Horses, one of the most important finds in history. Extending the digs, scientists first discovered Pit No. 1, the biggest vault out of the three that can be seen today. Soon after the discovery, the State Council authorized to build a museum on the site and in 1976, two other pits were uncovered at just 20 to 25 meters away from the first.

A soldier and horse, preserved on display. Wikimedia Commons/Simon Chen/CC

Since the first discovery, a total of three pits and some other accessories have been uncovered by archaeologists who are still working on the site today. Facing the east, this museum covers an area of roughly four acres with three pits filled with more than 8,000 terracotta warriors and horses and more than 40,000 bronze weapons.

Pit No 1. is the largest, including more than 1,000 warriors, eight war chariots, 32 horses and about a thousand bronze vessels. All warriors seem well-prepared for battle.

On both the northern and southern sides of the war formation stand 180 warriors serving as flank guards facing east and west in order to protect their leader from the enemy. The lifelike soldiers are an impressive sight giving a deep impression on what artists created about 2,000 years ago. Besides the terracotta figures, many weapons were found including bronze arms in a good condition. Originally they all were painted in bright colors, but through natural light and excavation techniques the colors faded away with the years. Currently, about ten pieces of colored terracotta warriors have been protected through the use of modern technology.

Pit No. 2 is L-shaped and contains over 1,300 warriors, 90 chariots, crossbowmen, cavalry and thousands of bronze weapons that were unveiled to the public in 1994.

Pit No. 3 is the smallest of the pits, but equally as grand. The vault is in the exact shape of the Chinese character “凹” and contains 68 warriors, bronze weapons and gold, stone and bronze decorations, a war chariot and four horses that have been on display since 1989 to the public. One of the most interesting things about this pit is that most of the warriors in the pit are headless. Archaeologists believe that these warriors did have heads when originally produced about 2,000 years ago, but due to many thefts, almost all of the heads in this pit have disappeared.

Apart from these three pits, other smaller pits have been found known as accessory pits, called the “artisans’ graveyards”, the “slaughter pits”, the “stable pits” and the “rare birds and animals pits.”

Artisans’ Graveyards: Over a hundred skeletons in total have been found in this pit, all squeezed into 32 graves. Most of the remains were male, but a woman and child were found as well. These people were supposedly forced to work for the Emperor until his death, when everyone was killed and thrown into one grave. All positions are different, and the heads of the skeletons show that they were buried hastily by the tyrannical government.

Slaughter Pits: Out of the 17 slaughter pits found in the area, only a few have been excavated so far, containing bronze swords and the skeletons of five men and two women, aged between 20 to 30. Over 200 burial objects such as animal bones, gold decorations, silver, copper, jade, lacquer works and silk were also found in the pits, raising questions about who these people were.

Stable Pits: In Emperor Qin Shihuang’s Mausoleum, two sites containing stable pits have been found. Some of the pits contained horses, while others only a statue of a kneeling terracotta warrior. Like the artists, the horses are believed to have been buried alive. Emperor Qin Shihuang wanted to bring anything he had with him to the afterworld so that he could continue his luxurious life. This idea was then gradually adopted by emperors in later Chinese Dynasties.

Rare Birds and Animals Pit: Largest of all the accessory pits, the Rare Birds and Animal Pit was a place fo Qin Shihuang’s spirit to hunt in the afterworld. A total of 31 pits are arranged in the area but just two of them have been excavated so far. Strangely enough, coffins were discovered in the pits, inside which skeletons of animals believed to be deer were found. Statues of kneeling warriors found in the pits with the animals are believed to symbolize the feeders of the rare birds and animals of the Imperial court.

Impressed by the scale, archaeologists wondered about the artists who built all of these pits and every single part of the more than 8,000 warriors and horses excavated. During their repair work, some discovered names carved on the sculptures on the hips, under the arms, etc. A total of 87 different names were discovered.

Recruited by the Qin Emperor, these countless skilled artisans came from all parts of the Qin Kingdom. Each of them tried to bring the warriors, horses, chariots, and bronze weapons to life artistically in their sculptures. An estimated 3,600 artists were necessary for creating a whole armor during one year.

Artists wrote letters detailing their life and working conditions during the making of the army. Some of the letters were hidden in bamboo slips found in the pits. Here is an excerpt from one of the letter, translated into English by scientists:

“I have to work carefully every day, if I paint the weapons incorrectly, my officer will punish me very severely”.

Unfortunately for the artists, their fate had already been decided by their Emperor Qin Shihuang’s government. The remaining artists who were still alive when the Emperor died were ordered to be buried alive in the tomb passages, so that that the secret of their work and its location would not be revealed. Faithful to their master and Emperor, the skilled artisans were the victims of the powerful but tyrannical era of the First Emperor of China.