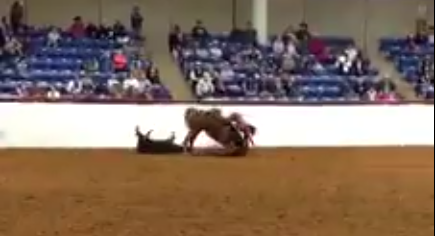 We originally shared this video two years ago when it first went viral, but it’s enjoying a second wave of popularity. Hold on to your hats, folks.

Editor’s note: While we at Horse Nation respect the use of a helmet as a personal choice, we encourage all riders, regardless of discipline, to #MindYourMelon.

Working cow horses are known for their agility and grit, and nowhere is this more apparent than in Ken Patton’s viral video from the 2014 Fort Worth Stock Show. Watch as competitor Mozaun McKibben and his horse get tripped up by a cow coming out of a fence turn, falling facefirst toward the unforgiving ground. And then… (You must be logged into Facebook to view the excitement.)

Ok. Here is the video of the wreck. Think you,ll agree that Mozaun is a heck of a hand with a horse or cow.

Not only did Mozaun’s horse pop to his feet, but Mozaun also caught his hat and the pair resumed their ride as though nothing had happened. What a great save by both!