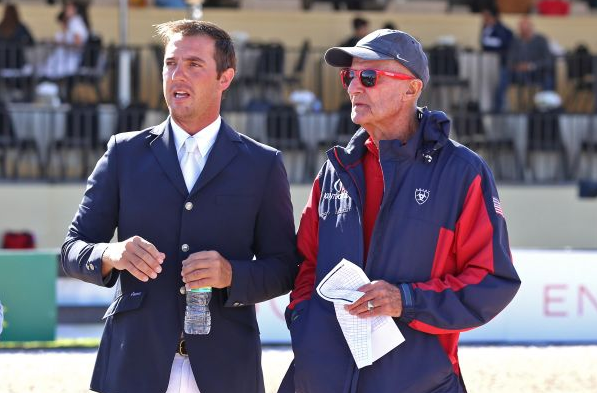 Between the release of his autobiography and a shift of teaching focus from clinics to individual students and coaching the Brazilian Equestrian Team, the hunt-seat legend is exploring new opportunities in the upcoming year.

After years as one the country’s leading clinicians, the legendary George H. Morris will be returning to teaching individual students in 2016. Putting his clinic schedule on hold, Morris will be coaching students Andrew Ramsay, Alex Granato and Tori Colvin of the United States, as well as Brazil’s Doda De Miranda and the Brazilian Equestrian Team.

Morris’ work seems to be already paying off as several of the students are making early season waves at the Winter Equestrian Festival, which began earlier this month in Wellington, Florida. De Miranda won the $35,000 Ruby et Violette WEF Challenge Cup Round 1, Grenato won a $6,000 1.40m class, and Colvin won the $25,000 Artisan Farms U25 Grand Prix.

In addition to coaching these students, Morris has been giving private lessons to a select group of talented young riders, while also preparing for the launch of his new autobiography UNRELENTING – The Real Story: Horses, Bright Lights, and My Pursuit of Excellence on March 15. (Check out Jumper Nation’s preview of the book here.)

Focusing on helping riders develop correct form and function, Morris has often been referred to as the founding father of hunt seat equitation. Second to none, his teachings, technique and style are revered around the world. Over the course of his career, Morris has been highly successful as a rider, coach, clinician, author and judge.

“Training with Mr. Morris continues to be a remarkable experience,” Ramsay says. “His logical and simple principle of horsemanship combined with his keen eye, relentless commitment and experience creates an environment of confidence and success.”

Granato adds, “It’s been really great working with him. He’s getting to know me and all of the horses, and it’s been a great opportunity for me. He offers great information and has been helping with the entire program, not just the riding. I have a lot of young, up and coming horses this season that we are building up to the next stage in their career. It’s been a lot of fun and working with him on the new horses for a long-term program for our winter schedule to get them to the main goal of grand prix horses.”

After working with Brazil’s Doda De Miranda and his wife Athina in 2013, De Miranda wanted to continue a relationship with Morris in 2016 leading up to the Olympic Games.

“Our Federation decided to invite him to be our trainer, and he was very happy with that because I think he has a very good connection with Brazil,” Miranda explained after his win in the first WEF Challenge Cup.

“I told him, as a part of that, that I’d also like him to be my personal trainer and coach, not only here because he said he’s going to be a lot in Europe now, and it’s much easier on him,” he says. “I am very lucky to have this opportunity because he’s a legend, and he knows a lot about horses and especially the confidence that he gives to the rider. When he coaches you, you believe that you can do anything. It doesn’t matter who is leading, you know when he looks to you and he tells you that you can make it.”

For more information about the George Morris and the release of UNRELENTING please visit http://www.ghmclinics.com.