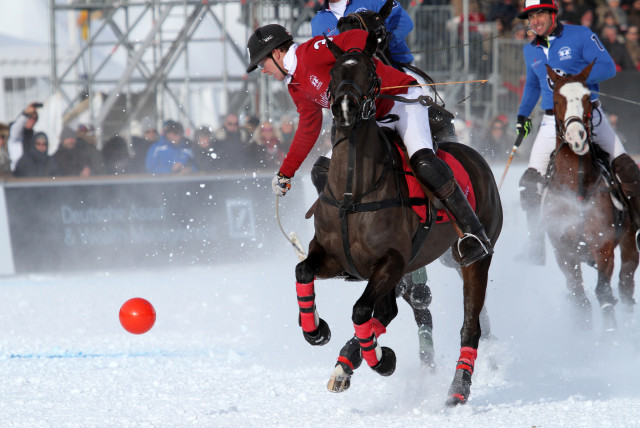 We caught up with US polo player Melissa Ganzi just before she took off for Switzerland to become the first woman to ever play in the world-famous St. Moritz Snow Polo World Cup.

The St. Moritz Snow Polo World Cup is one of the most prestigious polo trophies in the world, played since 1985 on the frozen lake of St. Moritz, Switzerland. Drawing the elite of high-goal polo players from around the world, the tournament also attracts spectators to the resort town, famous as one of Europe’s top ski destinations.

This feature video really drives home the intensity of polo played on the snow:

Hard-core equestrian sport in one of the most beautiful winter locations in the world? Yeah, I guess we could handle that.

While riding a horse at high speeds in a contact sport on a frozen lake might sound like absolute insanity, the reality is actually much safer than it seems: the ice on Lake St. Moritz is at a thick and stable level, and the natural snow layer on top of the ice is groomed carefully to create a safe and comfortable riding surface. Atmospheric factors this year required the use of artificial snow via machine, but the surface is identical to the groomed surface of tournaments past.

We were lucky enough to catch Melissa Ganzi, already a pioneer for women in the sport of polo, just before she took off for Zurich to meet the rest of her team for the St. Moritz Snow Polo World Cup. Ganzi will become the first woman to ever play in the World Cup in St. Moritz history, so we were honored to speak with her and wish her good luck before her trip.

Snow polo! So how do you adjust to playing on snow? Does it ride very differently from playing on a grass field?

Well, I’m used to playing on snow in Aspen, but it’s going to be different in St. Moritz. In Aspen, we play three-on-three, we’re on a rugby field, and we use adopted arena rules. In St. Moritz, it’s four-on-four, we’re using outdoor rules, and we’re going to be playing on a giant frozen lake. The rules will be similar to if we were playing on grass.

The horses will have different shoes, so the snow doesn’t ball up over the frog, and they’ll have cleats on their hinds for a little extra traction. St. Moritz uses a snow-maker to create a surface, so we’re not actually playing on the ice itself — we’ll be on compacted snow. It’s going to be similar footing to firm sand.

How have you prepared as a rider?

I’m bringing lots of layers! Actually, we’ve been getting a lot of rain in Florida, so I haven’t been able to play a lot of polo outside; I haven’t gotten in a lot of practice. I’ve been training quite a bit in the gym. One of the biggest adjustments is that in Aspen, I bring my own horses; in St. Moritz, we’ll be riding horses brought in from Spain.

Do you get any practice time on these new horses? Or do you just have to climb on and go?

So you are the first woman to play at St. Moritz! How are teams selected?

The four teams are each named after their sponsor — Maserati, Perrier-Jouët, Cartier, and my team is Badrutt’s Palace Hotel. That’s the big hotel right on the lakeshore. Cartier has won the World Cup several years in a row; it’s all the same members coming back. They’re the defending champions.

So I got the opportunity to play — I’m so honored and excited. Usually I’m playing 20-goal polo at this time of year, but I’m not doing that this year, so I was able to travel to St. Moritz.

Oh, definitely — St. Moritz is a once-in-a-lifetime opportunity. It’s where snow polo originated. To be able to play there is just amazing. It’s going to be a different format from what I’m used to and a totally new experience. It was a long-time dream of mine to someday play there.

My big polo bucket list item would be to win the US Open. My husband won it in 2008, but that’s definitely my top goal as a polo player.

For more information about the St. Moritz Snow Polo World Cup, please see the event’s website. You can also watch the tournament via ChukkerTV.