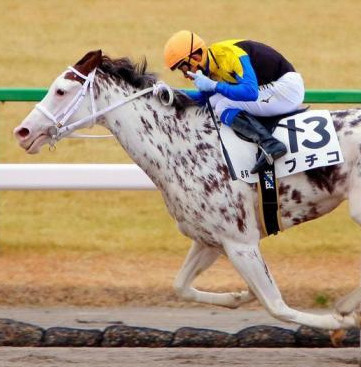 We love Thoroughbreds for their athleticism, but they’re certainly not known for their eye-catching color. Bays and browns are common; grays are a hotly-coveted commodity. Really, if you can nab a chestnut with a little chrome, you’re rolling pretty fancy in the Thoroughbred world.

Despite those loud spots, giving her the look of an Appaloosa or perhaps a certain pinto patterning, Buchiko is in fact 100% Thoroughbred. The four-year-old mare runs on the dirt in Japan, where she’s accumulated an enormous fan following due to her unusual coloring.

Buchiko’s dam was born white, a rare color indeed for any Thoroughbred — and we don’t mean she was born gray and grew lighter with age. Shirayukihime, whose name translates to “Snow White,” was born a true white. While several of Buchiko’s half-siblings were unusually colored and attracted racing fans in Japan, Buchiko’s talent on the track marked her as the most successful of Shirayukihime’s offspring, with the mare earning three wins in eleven starts so far.

With her head-turning looks combined with some speed, Buchiko has become a fan sensation: her team has capitalized on her coloring, dressing her grooms in similarly-patterned outfits and selling Buchiko merchandise. The Japan Racing Association, recognizing her particular fame with female racing fans, has used her as a headliner to attract more women to the tracks — despite the fact that Buchiko is only competing in low-level races.

While she’ll probably not be the next Japan Cup winner, Buchiko is first in our hearts for that beautifully rare coat pattern.