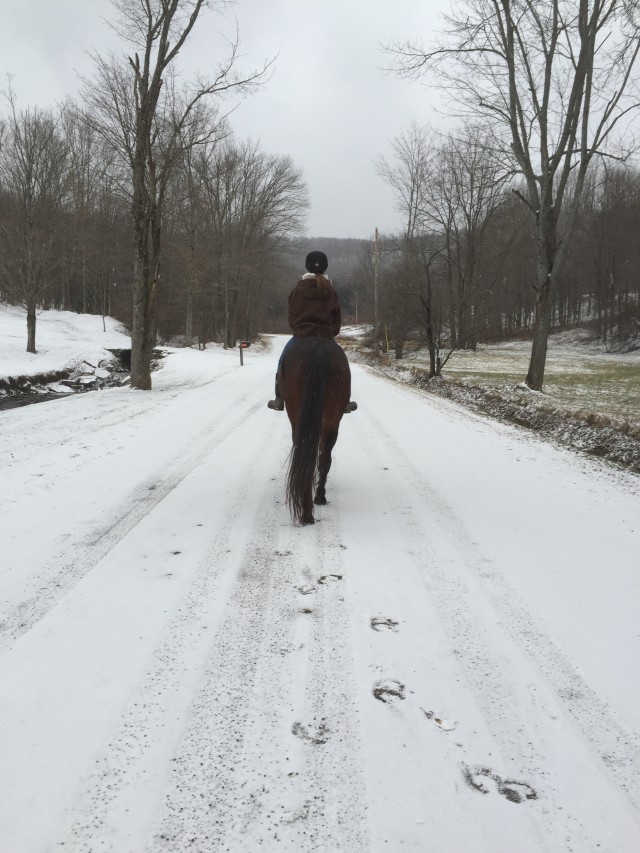 On Christmas Day, I went out for a trail ride wearing only a light sweatshirt and jeans. However, now that winter has set in for real, my expectations for the season have, as usual, disintegrated into harsh realities.

This year, I told myself that I was going to blanket my horse at the first signs of cold weather and keep him blanketed in hopes that he would be slightly less hairy, easier to keep dry when working, require less cool-out/drying-off time, go through fewer coolers, etc. I have even considered body clipping as a gung-ho approach to keeping my animal looking like a horse rather than an overly-fluffy stuffed bear. Naturally, he resembled a woolly mammoth by late November and I have once again acknowledged defeat in my attempt to control Cricket’s winter coat. I have come to terms with the fluff and accept its superiority in cuddling purposes as opposed to shorter-haired horses. Another shedding season will come and go, and in the summer I will have a regular horse again.

My winter barn wardrobe has grown in size over the years, but I always find myself wearing the same things. That fancy new vest I got will sit in the closet and I will tromp outside in my ratty old duct-taped gloves, giant men’s sized winter coat, and muck boots. The aspirations I had of looking stylish during winter months and investing in sophisticated heat-insulating layers have dissolved because, when it comes down to it, I’d rather be warm and comfortable than look nice. Do I have several pairs of warm leggings that will fit under my jeans or breeches to ride in? Yes. Will I end up wearing sweatpants instead? Yes.

Riding in the snow rarely works out how I think it will. After months and months of cold mud, the snow is indisputably a welcome change. When Cricket would come in wearing half the pasture on his long winter coat and clumping in his mane and tail, I would dream of quiet snowfalls and brushing snow from his coat rather than scrubbing at mud for hours. Once we get hit hard with snow, though, our attitudes shift a little bit—he has no interest in plowing through snow (especially if there’s enough to cover the grass so he can’t sneak in a snack when he thinks I’m not paying attention), and I don’t particularly like the feeling of blowing snow whipping me in the face (I have yet to try riding in ski goggles, but it does seem like the logical solution). Feet full of ice balls replace the mud-caked legs, and I inevitably fall at least once a week lugging hay out to the pasture.

We make the most of the winter and ride in it anyway, providing the conditions are safe, and end up having fun. I may sit like a lump on top of my fuzzy horse and make slow progress through the snow drifts, but in the end I wouldn’t ever trade having four seasons for a boring endless summer.