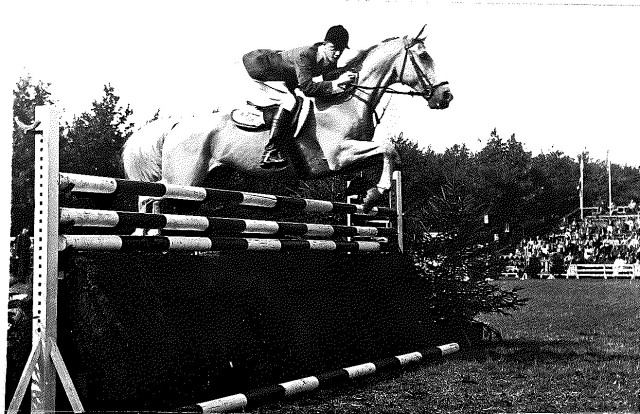 On March 12th, 2016, the Palomino Horse Breeder’s Association or PHBA will welcome a show jumper to their Hall of Fame: Nautical, the star of Disney’s, “The Horse with the Flying Tail,” will be inducted into the Hall of Fame.

Born March 22nd, 1944, Nautical was originally registered with the PHBA under the name Peter De Oro. His sire was a registered Quarter Horse named Muchacho De Oro and his dam was an Army remount horse known as Lula Lee. His breeders were Mr. Howard E. Babcock, Jr. and Mrs. Anne Babcock of South Springs Ranch, Roswell, New Mexico. He was originally trained in both western and English; however, his love of jumping was apparent. As a three-year-old, Nautical was trained by Suzanne Norton-Jones, who eventually went on to be an American Quarter Horse Association Hall of Famer herself.

Courtesy of the Jones family.

Known as a phenomenal jumper capable of turning in a fast and clear round, Nautical was described as being a crowd-pleasing horse who was fun to watch but difficult to ride. In a 1960 New York Times article, Bert DeNemethy described Nautical as always seeming to have one eye on the crowd at shows, as though the horse were saying, “well, I’ve got them now.” In the USET Book of Riding, Hugh Wiley summed up Nautical’s personality, saying that Nautical’s philosophy seemed to be “go for broke.”

Suzanne Norton-Jones sadly passed away recently. If not for Suzanne, Nautical likely wouldn’t have been nominated for the PHBA Hall of Fame, as it was her wish to see him get into their Hall of Fame. Suzanne was also very helpful and willing to share her memories of a great horse; she remembered Nautical very well, describing him as having a “strong independent streak.” She also trained two of Nautical’s siblings, Tinkertoy and Rogue Ann, along with her numerous other accomplishments. Thank you for everything, Suzanne.