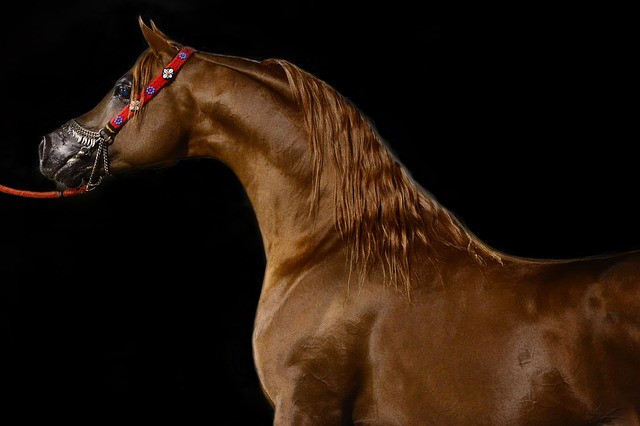 Test your knowledge of this popular breed!

I’m talking incredibly ancient, 1,450 B.C.E. old. Art from the reign of Egyptian Pharaoh Thutmose III shows the first evidence of “Arabian-looking” horses, according to historians. Once established, the Bedouin tribes maintained strict purity of the breed, which would eventually become one of the most valuable commodities in the region.

Truly is that horse prized by them above all else in the world. You may hear the Bedouin remark: ‘Children of mine may hunger and thirst, but never my mare.’ — Lady Anne Blunt, who travelled the Arabian peninsula in the 19th century.

The horse was fundamental to the Bedouin way of life. War horses were almost always mares, which were considered hardier. Grass was scarce, so the horses were fed on dates, barley, and milk. A war mare was fed almost exclusively on milk, to aid in muscle development. Horses would share their masters’ tents, where they were safe from raiders and could bond with the family.

One of these horses is not like the other.

A pure Arabian is easy to differentiate from any other breed because it’s skeleton is unique. Instead of eighteen pairs of ribs, the Arabian has seventeen. They have one less thoracic vertebra and one less lumbar vertebra. Long story short, the shorter loin increases capacity to carry weight while the wide barrel allows greater heart and lung room in the chest cavity for increased endurance.

All Arabians have black skin under their coats, an adaptation that protected them from the harsh Arabian sun.

Bred for war, made for poetry.

Never was there another breed that so captured the hearts of religious leaders, artists and poets.

When Allah went to create the horse he spoke to the South Wind and said: ‘I want to create an animal out of you. Make yourself dense.’ And the South Wind did, and from this dust Allah created a kamayt-coloured animal.’ Then Allah spoke: ‘I create thee, O Arabian. I give you the chestnut color of the ant; Men shall follow thee wherever thou goest; thou shalt be as good for flight as for pursuit. To thy forelock, I bind victory in battle. Thou shalt be for Man a source of happiness and wealth; thy back shall be a seat of honour, and thy belly of riches; every grain of barley given thee shall purchase indulgence for the sinner. Then Allah blessed the Horse and gave him the sign of glory and happiness – a white star on his forehead. — from a Bedouin legend.

[…] the steeds that run, with panting breath, and strike sparks of fire from their hooves, and push home the charge in the morning, and raise the dust in clouds the while, and penetrate forthwith into the midst of the foe […] — The Koran 100:1 – 100:5

The swiftest, best horses were chestnuts; they were the winners of races. This was the colour of horse the Prophet loved, and when a chestnut horse flew under the sun, he was the wind incarnate. — Horses of the Sahara, by General E Daumas (1850).

“Very superstitious, writing’s on the wall.”

Once an Arab had a fine mare which he had bred for the very first time, and many gathered round to watch the birth. All were already vying to buy her offspring. The foal’s head came out first, and it had a star in the middle of its forehead. Its master rejoiced; his horse would surpass the dam. Out came the near-fore, with a white cornet, and the cheering owner asked a hundred duros for his foal. Next came the off-fore, with a white sock; down went the price to fifty duros. Then came the near-hind; it was white-stockinged, and the Arab, delirious with joy, vowed he would not sell his foal for anything in the world. But then out came the fourth foot, pure white! And the owner ordered the foal to be thrown on the nearest dungheap, for that was the sum of its worth. — Horses of the Sahara, by General E Daumas (1850).

The devil is in the details, as they say. Two white stockings in the back were considered lucky, especially if accompanied by one white foreleg, as were one hind and one fore on opposite sides. Two stockings only on the forelegs were very bad, while four stockings were worst of all.

A star on the face was considered the most lucky, followed by a stripe or blaze that reached down to the lip, which meant his master would always have milk. A bald-faced horse was bad luck; if the horse also had four white feet, it was said to carry its own shroud with it.

Riding a horse with a white mark on its body before the saddle was considered a foolish thing to do, for it would invariably lead to death in battle.

The very worst omen, however, was ‘a horse with a white stripe that did not reach his lip, along with a white off-fore. Whoever saw him prayed to Allah to be spared from the evil that accompanied such a horse. He was like an hour’s poison, that slew in sixty minutes.’

A whorl under the mane, on the side of the neck is called ‘the finger of the Prophet’ and means that the master will die safe in his own bed. Meanwhile, a whorl on the rump beside the tail brought ‘trouble, misery and famine’, the ‘whorl of theft’, found on the fetlocks, meant that ‘day and night the horse says: “Oh, my God! Grant that I may be stolen or my master die”.’

The gift of the wrong horse could be considered a veiled threat.

Know any awesome Arabian trivia? Give us a shout in the comments!