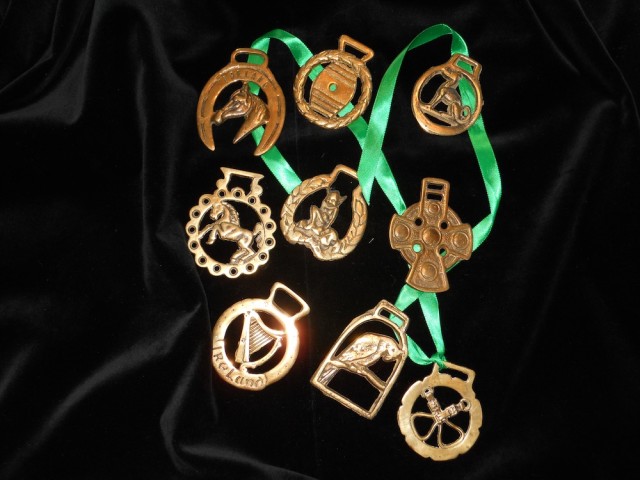 More than just mementos of a bygone era.

I have nailed a black leather strap heavy with horse brass medallions by the mantle of each home I’ve made since 1979. My sister had brought the strap back from Scotland years earlier. I didn’t know what they were; I just loved them. That’s the lure of horse brass. They sneak up on you.

Many of my brasses came from a jankity hardware shop in Limerick. It was stocked with needful odds and ends for the local cottage dwellers. Amongst a hodgepodge of equestrian paraphernalia I found two enticing barrels of horse brass. Digging through revealed treasures including the pride of my collection, a four-inch horse head.

Most of the rest of my stash was purchased for a few scant pounds at roadside shacks that popped up like periods along a desolate road from Armagh to Kilkenny, Ireland. My cousin brought two brasses back for me from her trip to England. She didn’t know what they were, but when I asked her to bring a brass for me she did, and a nice long strap of medallions for herself.

Trimming horses with horse brass dates back to the pre-Roman period (fourth to the first century BC). The early brasses were mostly bronze.

The manufacture of brass alloy in England appeared during the reign of Queen Elizabeth I (1559-1603). Brass casting was introduced in the seventeenth century, but was not used for decorative objects until the 1700’s. That’s when horse brass medallions appeared.

Nickel was used to create horse brass on the coasts and in Scotland to withstand the salt air. Horse brass cast of silver or gold inlaid with semi-precious stones were commissioned by the wealthy.

Get thee gone, woes of “the evil eye” and come hither good fortune. Horse brass medallions were believed to protect the horses. Vital for work, transportation and war, horses were possessions of value. Early motifs were inspired by ancient beliefs and superstitions that would ensure the health and safety of the equine asset.

Ancient Greeks and Romans considered the crescent moon a sign of good luck. Celestial symbols included the sun god worshiped by the ancient Persians who might sacrifice a horse to curry favor from the deity. The stars design seems to originate from the tale of the three wise men following the star of Bethlehem. A brass in my collection has the lyre of Apollo, inspired by Greek mythology.

The Romany Gypsies (migrating from Persia by the 11th century) used their skills as tinkers and metalsmiths to introduce the playing card patterns of diamonds, hearts and clubs to the protective brasses on their wagon horses. Perhaps the club design on one of my brasses was inspired by the Romany Gypsies.

Later, motifs represented the horse owner’s trade. Farmers had agricultural objects like trees and barnyard fowl. Some trades were illustrated with images of churns and barrels.

Titled gentry represented themselves with brasses bearing the family crest or some portrait or heraldic image such as a bear, lion, unicorn or elephant; in hunting circles the stag, fox, hounds, eagles and swans were common.

How horse brasses are worn

Dray and cart horses were decorated with ten to twelve medallions. One or two large brass medallions would be secured at the forehead. The smaller (2 3/4 inch) brasses would be attached to a martingale. Bells might be added to create a showy sight and sound.

(Modern women have been known to drape themselves in horse brass — well, the horse brass motif can be found on some of the equestrian themed Hermes scarves.)

Early horse brasses were entirely cast in molds, but later horse brasses were either cast or stamped from sheets of brass. Studs (getts) on the underside of the medallion enabled the piece to be lifted from the mold. They might be filed down or used to attach to the leather strap. The impression of studs can also be found on later reproduction brass.

The lighter and cheaper stamped brass appeared around the 1880’s and peaked just before World War I.

The use of horse brass peaked before World War I and waned with the rise of mechanization that replaced the use of the horse. Modern horses still don the brasses for show, but the medallions are more popular as decorative items. The ancient brasses are highly prized.

My small collection of treasures didn’t cost a lot, but the memories of the thrill of re-finding the “dunky” little shop in Limerick after several years and the “fine soft day” when we pulled off the road at a tinker’s lonely hut has high value to me. The strap of horse-protective talismans shine at my fireplace and remind me of how horses labored and of their stout, kind hearts. I’m glad we don’t rely on superstition to protect them anymore.

For detailed and expert information on horse brass, check out the Horse Brass Society, from where I drew most of my research, and the Bishop Bonner’s Cottage Museum Dereham Antiquarian Society near Norwich, England.