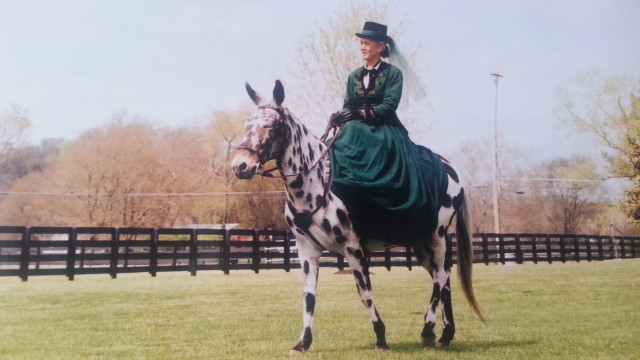 Nothing makes a statement quite like riding an Appaloosa mule sidesaddle. Candace Wade catches up with Jeni Starr Housley and Hooch the mule to learn more.

Downton Abbey spoiler: Lady Mary discards her sidesaddle to ride astride (horrors!) in the first episode of the final season. She must not have read the piece in the UK Daily Mail heralding the resurgence of the uber-modest, thigh-gripping mode of equine travel — in both England and around the world.

Jeni threw her leg over a horse later in life — in her forties — when she and her husband, Gary, moved from Florida to Tennessee. Jeni shares, “I was scared, well, a cautious rider, but I never showed fear.” She attributes her game-face to having polio as a child. “I was told to be nice or no one will come to see me,” immobilized by splints and plaster casting. “So who would want to visit a sad, unhappy child all trussed up?” Then, Jeni rode a mule. “I liked the mule. He was steady and sure. Once you’ve had a mule, you never go back.” Hooch, Jeni’s cinematic spotted mule taught her patience and trust. Trust was just what she needed in order to throw herself into her obsession — everything sidesaddle.

A dusty sidesaddle heaped in the corner of a used stuff store in Kentucky lured Jeni into collecting (she owns 10 sidesaddles) and her quest into the history of the sport. “I was fascinated by the tiny stirrups that held dainty boots,” recounts the woman who is nearly six feet tall on a svelte frame. “I had to know more about the periods the saddles were used and the women who mastered them — the living history.” An article titled “A Noted Side-saddle Horsewoman Mrs. Fletcher Harper” in the May/June 1994 Side-Saddle News drove Jeni to want to ride sidesaddle.

Courtesy of The International Side-Saddle Organization

She and Hooch trailered to east Tennessee for a half-day lesson where Jeni learned to tack up and . . . “They had me jumping right away. I was scared to death of the sidesaddle. It felt like a raft on the ocean, but it felt natural. I had to really grip the horn with my right leg because that’s all I had.” And Hooch?” “Hooch would right me if he felt me going . . . he moved under me to catch me.”

At age 50, Jeni joined The International Side-Saddle Organization in a clinic at the Equine Affaire Ohio. Renowned expert and Class A instructor, Roger Philpot, (the same man who later taught “Lady Mary” to ride for the PBS series) was slated to give lessons at the clinic. She didn’t tell them she would be riding a mule.

“The stands were filled. Hooch and I rode in,” joining the horses and period-perfect ladies in their expensive, authentic costumes. Jeni wore her “pieced-together period riding habit.” Hooch wore his spots.

“Roger looked really surprised.” But the audience loved Hooch: they “clapped at my first jump. Hooch was a show stopper. He was just fine with the applause, but the clapping made the horses nervous, so Roger asked the audience to stop.”

Jeni and Hooch also performed to a packed arena in the evening performance of the equestrian extravaganza Fantasia. Again, “I was scared to death, but felt energized. I just did it.”

Jeni and Hooch rode in the 2001 Tournament of Roses Parade, at Breyerfest in Kentucky, The Derby Parade, Mule Day in Columbia, Tennessee and a host of other shows and parades in Tennessee. They have been awarded many prizes.

Audacious, unstoppable and still leading parades at 60-something, Jeni shares, “Believe me, a good ass will get you into the boardroom of the Belle Meade Mansion.” Change of habit aside, I don’t see Lady Mary daring to say that!