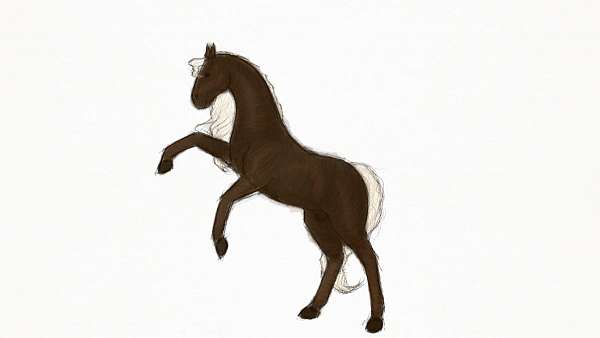 We interrupt your Friday evening to bring you this special Best of Craigslist report.

Reader Halle sent us this message: “Found this while I was searching around horse sale websites.  Not a Craigslist ad, but I thought you guys might be interested!  It looks like a normal farm…until you see the horses they have for sale.”

It start innocently enough: a nice photo of a horse and rider, silhouetted against the setting sun, with a description and brief history of the farm:

Moriarty Family Farms is a breeding and training facility in Pocahontas, Iowa. Run by the prestigious Michael and April Moriarty, MFF produces top-notch horses of various breeds, and the spectrum is ever-widening. Michael and April work with others in the Moriarty family, Michael’s siblings, cousins, and in-laws, such as Chadwick, Minnie, and Mildred Moriarty, to make MFF a completely family-run and very special place.

April May Moriarty, née March, born April 1st, 1988, in Pocahontas, Iowa, was raised in an equine-focused environment, as her father, Frederick Henry March, owned a number of racehorses. She met Michael Matthew Moriarty, who is now her husband of eight years, at a Thoroughbred breeder’s meeting in Kentucky. Coincidentally, Michael’s family was also from Pocahontas, but Michael had been away at a boarding school in Louisiana for the last few years, and they hadn’t had the chance to meet. Over the years, they grew much closer, their mutual love of horses being the first and foremost of their shared interests. Shortly after their marriage in 2007, Michael’s father, Donald Tristram Moriarty, owner of Moriarty Family Farms, suddenly and unexpectedly passed away. He left the family farm to Michael, who was more than happy to take up the tradition that had been passed down through many a Moriarty generation. Since then, Michael and April have dedicated every waking moment to their shared passion, and together they have made Moriarty Family Farms the perfect replica of their visions. Now, as they have come to the highest point in their breeding careers, much due to their ownership of Zeus’ Thunder, they have decided to branch out a bit and share their beloved passion with others of their kind: the fellow horse lovers of the world.

Seems legit-ish. Now for the horses:

Max is a spirited, spunky young boy with a promising future. He’s not yet broke to ride, and definitely not for inexperienced riders. To be honest, we’re selling him because he’s a bit of a handful, and juggling his training and everything else we’ve got going on here just isn’t going to work out for us. If things weren’t as crazy as they are, I’d be more than happy to keep this little guy, but as it is, we can’t handle it. I’m really going to miss Max, and I know he has great potential if you just work at it enough, so a good home is an absolute must.

Hey, we get it. Lots going on at your breeding/training/boarding facility, young colt is a handful, needs to move on. The ad photo? That’s bizarre, but surely the other horses for sale make more sense.

Aphrodite Eclipsed is the perfect addition to any Arabian breeder’s herd. Though she’s young, there’s no doubt that she’ll produce only the most beautiful of foals – the Adonises of the Arabian breed. I wouldn’t recommend strenuous riding or competing for her, as her legs are a bit frail and thin, but as a broodmare she’d be extremely valuable. The leg frailty is not genetic (it was caused by an accident shortly after birth), so there’s no need to worry about that being passed down to her foals. She’s also very gentle and personable, and hasn’t a single problem personality-wise.

Africa Baby is sure to be the next big thing to hit the track. She’s got it all – speed, competitiveness, and the will to win. All of that, and more, as she’s sure to produce a new generation of winners when she’s done racing. Coming up from the position of underdog, having no relation to any previous big-shots, she’ll wow the crowd and give the world something to talk about. Looking for the next Triple Tiara winner? Africa Baby is right here! Though her appearance may not be flashy, her spirit is, and no one who watches her speeding along in the home stretch will ever forget her.

I’m just going to mention that for fun, I ran “Africa Baby” (as well as all of her ancestors — you’ve got to check out the full ad for the detailed pedigree) through the Jockey Club registry, and these horses don’t seem to exist.

Spork In The Trail is a simply gorgeous Akhal-Teke stallion of magnificent proportions. He’s tall, beautiful, and well-mannered, as well as a fantastic show jumper. Since he is homozygous for the champagne gene, he produces excellently colored foals. Along with the golden sheen so typical of his majestic breed, this beauty also has blue eyes and a badger face marking. Though his temperament is absolutely wonderful, he is not a horse for beginners or more heavy-handed riders, as he is very sensitive and responds to even the lightest command, along with being very in-tune to his rider’s emotional state.

But wait — we haven’t looked at the pride and joy of this farm, the great breeding stallion at stud:

Zeus’ Thunder is an incredible flaxen liver chestnut brindle purebred Lusitano stallion. He has a proud and fiery temper to match his unique and unusual coloring. The brindle is duo-tone, some of the striping in a darker color and some lighter. His mane and tail are like golden wheat in the field, and as thick and wavy as a Friesian’s. He is only available for breeding to purebred Lusitano or Andalusian mares of high quality; we want all of his progeny to be as remarkable as possible for advertisement purposes.
His temperament he owes to his paternal granddam, Minotaur’s Daughter. Funnily enough, he, like his maternal granddam, Unlucky Stars, and her sire, Friday’s Child, was born on Friday the 13th. But don’t run away from his unlucky heritage ― we don’t take superstition into account here at Moriarty Family Farms. Zeus is perfectly normal, and all this Friday mumbo-jumbo is mere coincidence. Besides, what was it but a stroke of good luck that such a beautiful horse came from such a bland pairing? His sire was gray and his dam chestnut, but their lucky offspring turned out to be what can only be the most perfect and beautiful horse the world has ever seen, the noble Nisean horse reincarnated in a shining image of chocolate and gold.

We’ve Googled the farm. We’ve Facebooked the farm. We searched each horse specifically by name, and even looked for liver chestnut brindle Lusitano stallions (because heaven knows, that’s a rare combination). And in the end, our searches simply lead us back to this, this solitary, mysterious ad for a farm that, as far as we can tell, doesn’t actually exist.

So what is this mysterious ad? Why is it listed on a popular horse sales website? What artist created these likenesses? The longer we look, the more we realize that we’ll always have more questions, questions that will never be answered.

Best of Craigslist fans, this is one for the history books. Horse Nation out.