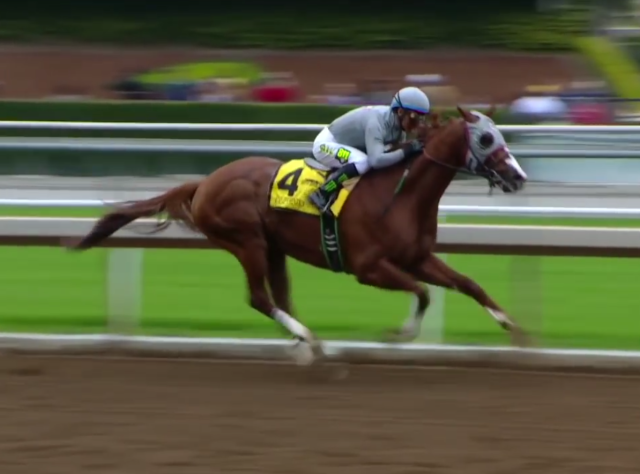 While many believed that the horse’s days of glory had passed, those closest to him knew otherwise, biding their time, allowing the horse to heal, get back in shape and plan a triumphant return on a quest to capture the biggest purse in horse racing.

But that’s pretty much California Chrome’s late 2015-early 2016 in a glossed-for-TV nutshell: after a stellar three-year-old season in 2014 that saw “Chrome” winning Horse of the Year (despite a failed Triple Crown bid and a tough loss in the Breeders’ Cup Classic), his connections pointed him towards an ambitious globe-trotting plan for world domination as a four-year-old.

After finishing second place in the prestigious Dubai World Cup in early 2015, a race notorious for being particularly taxing on American horses after traveling halfway around the world, Chrome headed to England to train for the Royal Ascot meet. Just days before his European turf debut, a hoof bruise forced a scratch, and the horse returned to the US. While prepping for Chicago’s Arlington Million, Chrome was then diagnosed with bone bruising in his canons, again forcing a scratch and a long-term layoff. California Chrome’s minority share was sold to Taylor Made Farm, where he spent his layoff, and the horse faded from general public awareness.

And then came rumblings from Team Chrome: America’s beloved racehorse wasn’t done yet. Decked out in new silks, California Chrome made his five-year-old debut for 2016 at Santa Anita Park, parading to the post for the Grade II San Pasqual Stakes. What happened next is a pretty familiar sight:

This win is just another chapter in the California Chrome fairytale: the horse’s next destination is none other than Dubai, for a second shot at the $10 million World Cup. We’ll be following Chrome’s international pursuits here on Horse Nation, so check back for more information in the coming weeks!