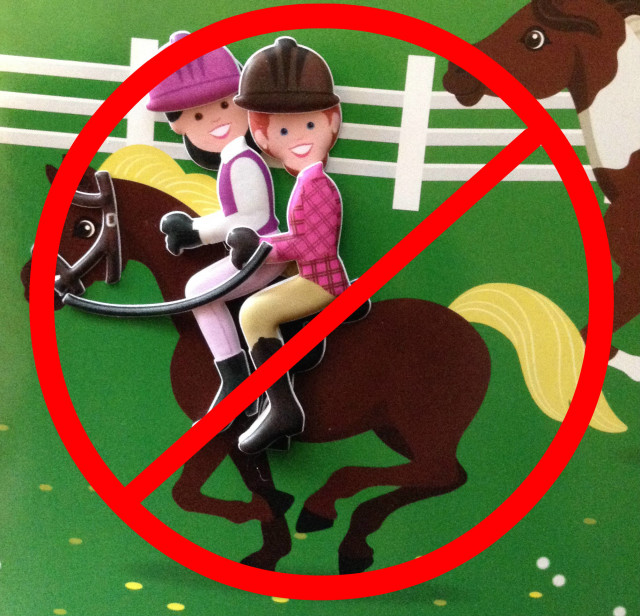 Truth bomb, the average horse makes noise for only two reasons. One, their horse buddies are leaving. Two, their food is coming. But for reasons unknown, authors and filmmakers love to make horses more talkative. I just finished reading a novel where the horse “whinnied in protest” after his bridle was yanked harshly.  No, that doesn’t happen.

This particular misunderstanding has become a pet peeve of mine. Most famously, in historical fiction novels, the gallant hero often carries his love interest in front of him on the saddle … comfortably. This just doesn’t work, folks. See that look of contained pain on Claire’s face during this scene from Outlander?

Example 1: Grown adult lady parts can’t ride atop withers. That is all.

Example 2: It’s very difficult to steer from the back – my models had to add another set of reins just to reach – while also avoiding kicking the sensitive flank area.

For future reference, the hero should throw the person being rescued on the back of the horse, behind the saddle. This is not only anatomically possible, but much more comfortable for all parties – and lady parts – involved.

This is probably every equestrian’s biggest caveat about fictional horses and their riders. What takes us a lifetime to master is accomplished in what I like to call “montage time.” Montage time is a magical realm where any super hard task can be set to music and mastered in under five minutes. In novels, this is also expressed by the characters riding long distances with little to no pain. I can guarantee if a person has never sat a horse before … and they ride 10+ miles cross country … they gonna feel the burn. All of these misconceptions can be easily corrected by watching this 2014 Evention TV episode.

Want to read a book that’s equestrian approved? Check out Catalyst by yours truly! That was shameless self promotion. #sorrynotsorry.