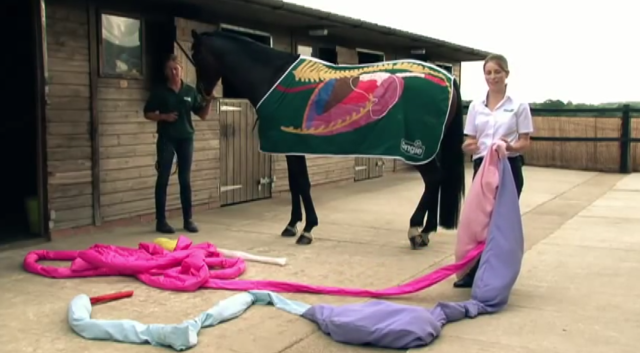 The average horse produces over 10 gallons of saliva per day. Us mere humans are lucky if we produce even half a gallon in that same time period. To produce all that spit, horses have three pairs of salivary glands: the parotid, located near the poll, submaxillary, located in the jaw, and sublingual, located under the tongue.  Unlike humans and certain other mammals, saliva secretion only occurs during chewing though.

One Way In, One Way Out

As stated by Dr. Susan Novak of the Alberta Agriculture Food and Rural Development, “The horse is not able to throw up because the cardiac sphincter connecting the esophagus and stomach is so strong, that food is only allowed to go in one direction: Down! The horse is adapted to eating small frequent meals, and therefore the sphincters work to keep the feed moving constantly along the digestive tract.”

This evolutionary development is mostly an advantage. First, a horse’s stomach is very acidic with pH of 1 – 2 near the pyloric sphincter. In comparison, the human stomach has a 1.5 to 3.5 pH range. The sphincter keeps the acid safely in the stomach where it can’t do any damage to the esophagus. In humans, this condition is called acid reflux. Second, this action of the cardiac sphincter and the pyloric sphincter at the exiting end of the stomach allow for the continual movement of the digestive system in the right direction to prevent any backups. This has evolved because horses are trickle feeders, grazing an average of twelve to twenty hours during a twenty-four hour day.