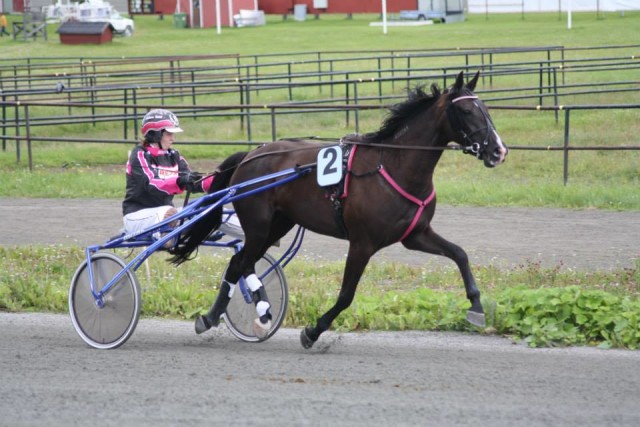 99% of readers will see the headline and make a snap judgement. The other 1% might be interested in what Helena Ståhl  had to say.

On December 20, Helena Ståhl  shared a  Facebook post about the death of her beloved racing companion, Iffy Mant. Ståhl  and her mare were an amateur racing pair in Sweden before the horse suffered a devastating injury. As Ståhl explains in her post, the horse was not going to make a recovery, the injury was too grave to allow Iffy Mant to be a broodmare, and Ståhl  absolutely couldn’t bear the idea of selling her to someone else as a pasture ornament and not be able to ensure her well-being long term.

In reality, this is a decision that horse people make every single day, with one notable difference. Ståhl also said she couldn’t bear the idea of the mare “going to the worms”, and so she stayed by the mare’s side as she was put down, and then kept the late mare for meat.

“For an eternity, people have been eating animals to survive,” Ståhl said. “Animals which we have taken care of and been responsible for. We fed them each day and pet them at night. Lately, that is not as accepted. Now it is better that we never even meet the animals we eat. It’s better that someone else does the job. We care less and less, and more important is the price tag.

“I understand that it comes as a shock to some people. That some choose to call me disgusting and callous. (But) we are slowly eating up our planet. The future will be about how we can save it before it is destroyed. No one can do everything, but everyone can do something. I’m proud every time I pick up a package of mincemeat out of the freezer. I’m happy every time I remember all the great memories we had together.”

Her post has gone viral in Europe, and she is being both praised and scorned for her decision by the general public. The Local, a Swedish Newspaper, picked up the story and interviewed Ståhl earlier this week, at which point she defended her decision and reiterated her reasons for keeping the mare’s meat.

Obviously part of the taboo for this in the U.S.  is that Americans simply don’t eat horse meat. We are among many cultures who find the practice a bit strange with no cultural precedent for eating equines. But numerous countries do consume horse meat, including Sweden, where it is often smoked and served as a cold cut, or found in certain sausages.

Ståhl has since said that despite the negative reactions, she does not regret her decision or that she publicly shared the experience, and hopes people will continue to read her full story.

Updated 1/8/15 at 3:42 PM: many readers brought up the valid concern that horsemeat can be unsafe for human consumption due to the presence of bute and other NSAIDs, as well as euthanasia drugs. Sweden, among other European nations in the European Union, has very strict policies regarding horses intended for human consumption and all medical notes are recorded on individual horses’ passports. While we cannot confirm that these rules were indeed followed in this situation, the fact remains that any slaughtered horses in Europe must be free from drugs, nor can they be slaughtered for human consumption if they are deemed unwell or unable to stand for transport.