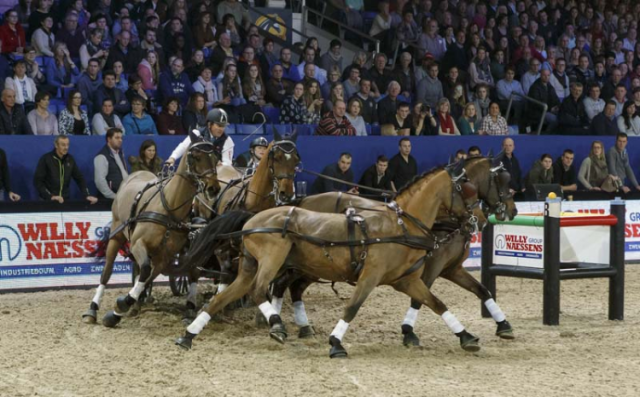 There’s a reason Boyd Exell has been our featured performance of the week twice in as many months: the man is a driving machine. Check out his latest win in Mechelen.

Boyd Exell is already in a very comfortable lead in the FEI World Cup Driving series, a solid 30 points ahead of his next closest competition. But if you think that’s going to let the king of indoor driving take an easy round for once, you clearly have never seen Boyd Exell drive.

I mean, this man drifts it in a way that would put every action movie stunt driver to shame. Look at that dirt fly!

As usual, the FEI World Cup Driving events do not disappoint as an entertaining spectacle. Not only is there plenty of fast-paced action and technical skill, but the stadiums are packed and the atmosphere is comparable to a major-league sports game: the crowd claps to the beat of the music (and also sings along to Neil Diamond — you know the part — “Sweet Caroline…. DAH DAH DAH”) and then falls to an excited hush for each combination obstacle.

Despite Exell’s healthy lead on the competition, the course in Mechelen, Belgium proved to be a bit tricky — Dutchman Koos de Ronde in second place navigated as quickly as he could but knocked a ball for a penalty. While Exell aimed for a steady but quick pace, he was still a few seconds ahead of de Ronde’s time, but knocked the very last ball on Gate 13, leading to a nail-biting finish. Exell, with the faster time with the same penalty, was named the overall winner.

With this victory in Mechelen, Exell has now won four legs and is qualified for the championship finals in Bordeaux, France in February.