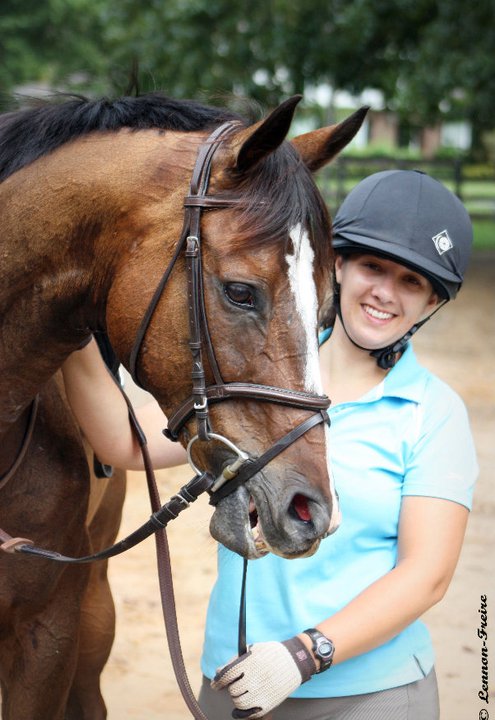 People look at me when I tell them about Alfie’s Bovine Lumpy Jaw like I’m crazy … then they look at Alfie and ask, “Are you sure it wasn’t strangles?”

In 2007, Alfie was just kind of hanging out learning to be a horse again after coming off a rough life at the track. At the time, I didn’t own him, but was taking lessons with and leasing another horse from his then owner. He had another Thoroughbred gelding he played pretty hard with, so one day when Alfie came in with a small golf ball sized lump on his left jaw, we all figured he was up to shenanigans with his buddy and somehow hurt himself. The vet came out about a week later, but the lump had already grown to about the size of an orange. The vet diagnosed it as an abscess (though she didn’t think it was a tooth) and put him on an agressive course of antibiotics … I think maybe 3 weeks worth.

A few weeks after the antibiotics were all done, the lump was still visible, but maybe only the size of a walnut and it stayed that size for a couple more weeks. Alfie’s owner called the vet again to tell her what was going on and she was surprised it had not completely resolved by this point, so the owner and the vet made the decision to have him referred to Auburn University. When the day rolled around for us to take Alfie to Auburn, the lump was apple-sized. At Auburn they did an ultrasound of the jaw. You could see that part of the jaw bone was gnarled a bit and that there was a rather large pocket of infection. Because of the location and the history of the situation, they decided the best course would be to knock Alfie out and surgically remove the infected bone and the pocket of infection.

Cultures of the infection were done so that the most effective medicines could be used and it came back – to everyone’s surprise – as Bovine Lumpy Jaw.

I wish I had been at Auburn for that revelation! I can only imagine… “The horse has WHAT??!!” The staff at Auburn said only an estimated dozen horses in the US had ever been diagnosed with the disease up to that point. GO ALFIE!!!

So Alfie stayed at Auburn for a week, receiving antibiotic injections as well as some other treatments. When he was released home, poor Alfie unfortunately got a secondary infection at the surgical site. The sutures had to come out and the whole thing had to be scrubbed/debrided daily. That poor horse looked like he had a hamburger patty slapped to the side of his face for another two weeks.

But finally, with good wound care and more antibiotics, it all cleared up. He’s suffered no long-term effects from BLJ, unless you count the very slightly misshapen line of his left jaw and the half a dozen white hairs that are there.

The little white hairs and slight deformation of his jaw. It is actually a little easier to see when his winter coat is in; the hair grows a little funny on the surgical site. – Amanda F. Smith.

Everyone who knows Alfie and me well enough knows our little tale … and I joke that he’s a medical marvel. His vet loves to tell the story too. Any time she has a student with her as a ride along to an appointment with us, she tells them “This is the horse that had bovine lumpy jaw!” So, I know Alfie is infamous at her clinic!