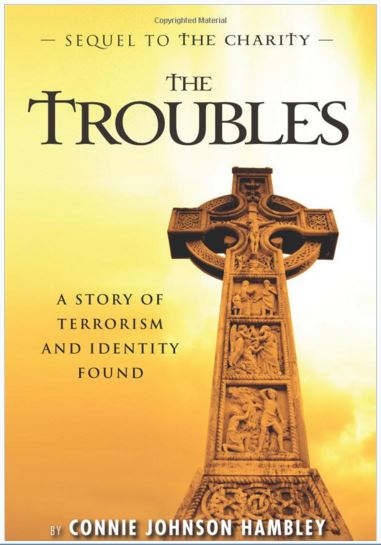 An exceptionally written, high stakes Irish political drama and mystery with just enough horse sense to keep you entertained and breathless from all angles.

“The Troubles”, a newly released novel written by Connie Johnson Hambley, is a powerful, suspenseful, and exquisitely written sequel to “The Charity”, the first two books in The Jessica Trilogy. I’ll be the first to say  I absolutely cannot wait for the third installment.

The Jessica Trilogy follows the ongoing saga of heiress Jessica Wyeth, who finds herself embroiled in a scandal that involves high stakes horse racing (flat and steeplechasing), longstanding Irish political violence and prejudice, and secret networks of high-powered men exploiting a network worth untold but absurd sums of money.

All the while, Jessica is attempting to put together pieces of her past when she discovers much of what she thought about her roots and upbringing was a complete fabrication, and it quickly becomes apparent that the truth is not only important to her, but to every reeling element of the political scandal that surrounds her.

The most important thing to a horse person when reading a book that’s not strictly “a horse book” but has “horse elements” is that the research is accurate, and it’s immediately clear that Hambley has done her homework. I quickly lost track of my attempts to catch the author in a goof concerning gridwork or grooming, and instead found myself thoroughly enthralled in the sweeping scenes of Jessica hacking her phenomenal string of horses in the rural Irish countryside. The racing scenes are equally suspenseful and well-written, and take the reader on a thrilling journey.

There are numerous flashbacks as Jessica tries to piece together the past, and the characters and plots from both eras are complex and stirring. A basic outside knowledge about Ireland’s recent history (the IRA, Northern Ireland’s fight for autonomy, and the history of Catholics vs. Protestants) will benefit the reader, but I actually appreciate that Hambley assumes a certain level of intellect and trivia from her readers and doesn’t hold your hand.

The book builds beautifully and the conclusion is full of twists and turns that make for deliriously good reading and evaporate the hours as the reader puts all the pieces together of a powerful mystery that’s not just a story, but also a stirring study of Ireland’s ongoing quest for peace.

‘The Troubles’ was pitched to me as a stand-alone book that did not need the first book to be a good read. I take two issues with this. The first is that after reading both books in reverse order, I would say that for me personally, ‘The Troubles’ would have made much more sense at the start if I’d read ‘The Charity’ first, even if I eventually put the pieces together. My second issue is that there’s no reason to skip the first when they’re both SO DARN GOOD. ‘Book 1: The Charity’ is not set in Ireland, but Kentucky and Boston, and is an equally enthralling read with great horse sequences, as well. I recommend doing yourself a favor and getting both for your lazy afternoons over the holidays, because they are a wonderful and thrilling escape.

Parts 1 and 2 of The Jessica Trilogy, “The Charity” and “The Troubles” are available in paperback or e-book formats on Amazon. Part 3 is expected to be available in late 2016.