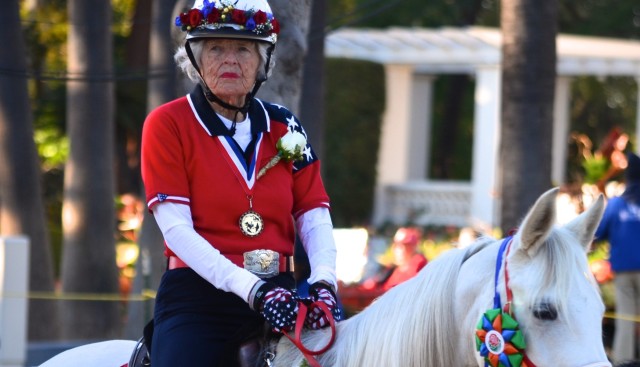 While the five-and-a-half mile parade route may have been a good deal shorter than the average ride, the AERC’s participation in the Rose Parade was no less significant to the lucky riders.

An American New Year’s Days tradition, the Rose Parade takes place annually in Pasadena, California as part of the pomp and circumstance associated with the Rose Bowl, argulably the most prestigious invitational in college football. The Rose Parade is typically viewed by over 700,000 people in the United States and broadcast to an additional 200 countries, so participation in the parade is considered a once-in-a-lifetime bucket list kind of experience.

The 2016 Rose Parade’s theme was “Find Your Adventure,” intended to encourage parade goers and viewers at home to find their own personal forms of adventure while highlighting the centennial celebration of America’s national parks. Therefore, it was only fitting that the American Endurance Ride Conference be selected from among over 200 applicants to participate in the parade.

“The AERC group featured many Hall of Fame horses and riders, including the grand dame of the AERC, 91-year old Julie Suhr, who has finished the 100 mile Tevis Cup more than 25 times, three times winning the Haggin Cup for Best Conditioned Horse. Her riding adventures have taken her from the remote expanses of Outer Mongolia to the searing heights of the Himalayas.

21 riders took part in this year’s parade. Among them, there was a total combined endurance and limited distance AERC mileage of 218,996 miles, spanning more than six decades of endurance events. Riders ranging in age from 24 to 90-something and from brand-new to 40 year-plus members. Several breeds were represented in the group of 24 riders including Arabian, Shagya, Azteca, Spotted Saddle Horse, American Saddlebred, Icelandic, Quarter Horse and even a Mangalarga Marchador.”

Candace also sent us the following images from the experience, with special thanks to photographer Kimberly Rivers.

Julie Suhr, the “grand dame” of the AERC

John Parke and his AERC “Hall of Fame” mount Remington, an Icelandic pony.

Special thanks to Candace FitzGerald for sharing this story! For more information about the AERC, please visit the organization’s website.