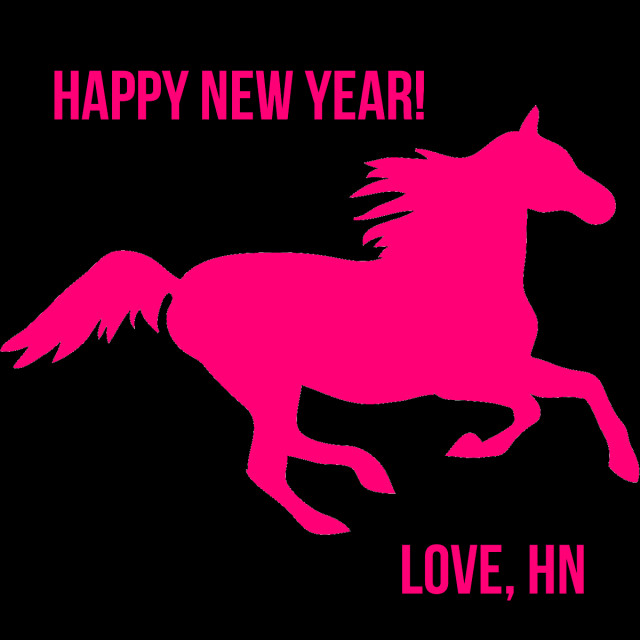 A brand new year lies before us, full of possibility and potential: what are you going to do with it? We rounded up our resolutions for 2016 to share with you: if you want the very quick-and-dirty version, it can be summed up by two simple words — ride more. But because Horse Nation spans such a variety of disciplines and horse lifestyles, those two words are interpreted in so many different ways: here’s our list.

2015 has a been a year of horsey ups and downs for me. In February I was reunited with Mishka, my now 25-years-young first horse, after 16 years apart; in November I grieved the loss of my first upper-level horse Rowdy; and just a couple weeks ago my plan to get my 16-year-old on-hiatus eventer Esprit back on the program for a swansong year or two was abruptly derailed by a career-ending soundness issue.

The year has brought reminder after sobering reminder that everything has an expiration date (with the exception of my tough, sassypants Mishka, who is probably going to outlive us all), as well as the ability to transform in unexpected ways. I may not be jumping the big jumps these days, but I still have two special horses to hug and brush, and I’m putting my years of in-the-saddle experience to use covering events all over the world as an equestrian journalist.

I’m not big on resolutions but I do think there’s a lot of value in clarifying intention. My intention for 2016 is to remember the lessons learned in 2015, and to honor them not by examining my life through the lens of the past but rather by experiencing it in the present.

In 2015, I recall resolving to ride more, and when extenuating circumstances, weird weather and poor time management prevented me from being able to do so, I felt a terrible sense of guilt and stress, which really didn’t make it any easier to get to the barn the next day. And then I looked at my horses, who get to live in a big pasture and be horses and simply enjoy each other’s company. While they seem to enjoy my visits and are generally open to the idea of going on a nice wander around the pastures, their world does not seem to hinge on training programs or show schedules. So in 2016, I vow to simply enjoy the company of my horses and the idle hours I get to spend with them, whether I’m sitting on their backs or walking by their sides.

Because insanity is a specialty of mine (I’m an eventer, after all) I’ve resolved in 2016 to write every single day. In 2015, I had a baby, changed careers, moved barns, and considered setting my horse free in the desert approximately 237 times. So just in case 2016 is even more ridiculous, I’ve decided to commit myself to the absurd task of writing at least 365 things about myself, others, wonderful places, and of course, horses. A lot of that writing will be right here at Horse Nation, but if you’d like to see what else I decide to spew forth from my brain in the next year, you can follow me at my website and on instagram!

I plan to train more consistently with my eventing mare and move up from Beginner Novice to Novice level in 2016. It’s been very difficult for me to stick to my guns now that the Minnesota winter is in full swing, but my upcoming relocation to the east coast will hopefully remedy that! I also plan to enjoy more trail rides with both of my horses, and I’d love to try out some fun and new (for me) disciplines – foxhunting, anyone?

As far as “real world” resolutions go, I will find more time for my art and traveling in 2016. I just launched a Kickstarter campaign for an adult coloring book that I’d love to publish this year, which is probably the scariest and most exciting thing I’ve done in a while. Moving to a different region will give me more of a reason to explore and experience new places!

In regards to polo, I want to focus on being a better team captain. I was thrust into that role several times last year and failed miserably. I need to be more adept at passing the ball and predicting my teammates’ (and opponents’) movements, i.e., “reading the field.”

At home, I want to take a solemn vow to clean my tack once a week every week.

También me quiero llegar a ser fluido en español este año. I can read and write the language, but can’t speak it. That has to change if I want to play polo in Argentina next winter.

Sometimes it’s hard to put your plans and resolutions into action. Why do you think we see hundreds of people swarming to the gym on January 1, only to disappear a few weeks later? I’ve been a repeat offender of talking but not acting, so this year I am not resolving to do anything specific, rather, I am resolving to become a person of action. There are many things I want to accomplish, many of which have not happened because I’ve only ever thought about them. Thinking becomes dreaming, which can then be turned into action — but most of the time, we’re too scared of our own dreams. I think the quote goes something like “If your dreams aren’t big enough to scare you, dream bigger,” and that will be what I think of moving forward. Action over apathy. That’s my resolution

In 2016 I resolve to not buy my horse new protective boots just because they’re on sale… or because they’re in a color that would look really cute on him… or just because. I resolve to spend less time on tackoftheday.com and use the money instead to make some serious contributions to my IRA. Ok. I need to stop myself because I’m a big believer in setting realistic goals, and let’s be honest, the previously-mentioned resolutions are NOT realistic. So this year I have one major resolution and that is to embrace that which scares me and not let my own self doubt hold me back. I know that sounds tough, but I assure you it’s much easier than resisting those adorable, fleece-lined brushing boots!

My resolutions are to meet up and ride with some of the amazing women I’ve met through my book Horse Sluts and Horse Nation, and to dig deep to find inventive ways to address the subject of Tennessee Walking Horse soring in print in order to help get the PAST Act 2015 passed and make the “big lick” un-chic in Tennessee.

What are your New Years resolutions — horsey or otherwise? Share with us in the comments, and go riding!