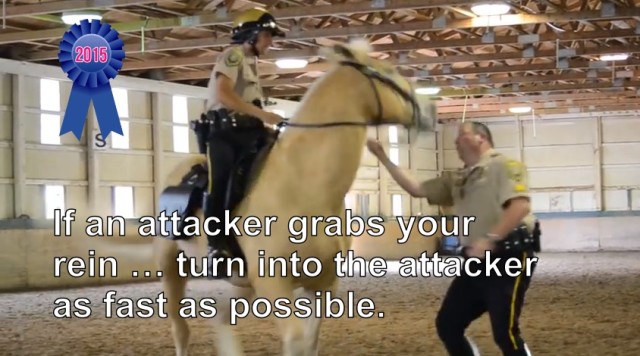 What would you do if, while out on a hack, someone attacked you and your horse? Police are urging riders to learn the basic steps to protect yourself while riding out alone.

Horse and Hound UK reported that on February 24, Lucy Lee was out riding her mare with only her two Corgis as company. A man on a bike stopped Lucy to request work and ask where she lived. He continued to harass her for over a mile, pushing his bike into the horse several times.

As a person who regularly hacks out alone, this story is the stuff of my nightmares. I have been honked at several times and occasionally people will even stop their vehicles and ask me questions about my horse. So what should we do if these minor annoyances become an actual attack?

Police have issued this advice:

Check out this informative video provided by two mounted Rangers:

The Rangers went on to advise all riders to train their horses to turn quickly on the forehand and haunches. Playing with a giant ball or barrel is also helpful, so that your horse knows it is okay to turn and push into something when properly cued.