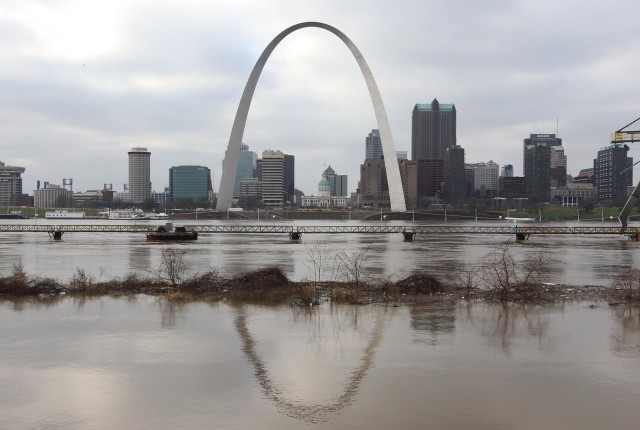 A historic flood is currently taking place in Missouri, forcing many people and horses from their homes.

Large amounts of rain over the last week have caused many areas of Missouri to declare a state of emergency following historic rates of flooding. Centered mostly in St. Louis and the surrounding areas, the Bourbeuse, Mississippi and Meramec rivers have flooded, displacing many people from their homes in a matter of hours.

The flooding has also affected several Missouri horse farms, who were forced to evacuate their horses to higher ground in anticipation of the river crest.

Graphic via the National Weather Service.

Several of these farms, all of which house many horses, are virtually invisible under the rising water.

Chris Kraus owns Kraus Farms in Valley Park, said she started planning when she was told the forecasted flood level was 33 feet. “33 feet would have hit one of our barns, and we didn’t want to be sitting ducks out there with over 100 head of horses,” she said. Fortunately, Chris and her family made the right call as the flood quickly progressed to 44 feet, essentially burying the entire farm under water.

Here is a full view of kraus farms. We are thankful for all the people that helped us clear everything out before the flood hit.

Kraus Farms has 180 horses in their care, so evacuating was no easy process. Fortunately, operating on a flood plain prompted the Kraus family to plan ahead. They purchased another farm in Union, Missouri to use as hay fields and an evacuation site if needed. It only took one day (and five rigs traveling back and forth) to move all horses and as many supplies and grain they could manage.

“We have several grain silos at the farm, so we got as much as we could but we did lose the grain in those silos. The hay we have off the flood plain, so we didn’t lose that,” Chris said. “My biggest concern is the condition of the property — we know there is a feed room floating and we aren’t sure if any of the barns were lifted up or not. But the sooner we can get back and get running, the better because we don’t make money when we aren’t operating.”

Kraus Farms is not the only farm affected, as several others found themselves in harm’s way as the water continues to rise.

Some pictures from the flood.

At this time, it appears that all horses affected by evacuation have been moved to higher ground. We will continue to monitor the situation in Missouri, as well as provide ways in which you can help. At this time, there is no one organization to contact to offer assistance.

A few farms in the area have opened their barn doors to stranded horses. Here is one such posting:

With the floodwaters still rising I thought I would put this out there….If anyone needs a place to put horses during…

If you or anyone else you know can help, please comment below so that we can update this post.

We’re wishing for all the best for all who have been affected by the floods in Missouri. St. Louis is my hometown, and it broke my heart to drive through this weekend and see so much destruction. Even now, the danger is far from over as the rivers continue to swell and rise. Interstates have been shut down, and many areas are impassable. Water rescues are underway for those who are stranded on their rooftops.