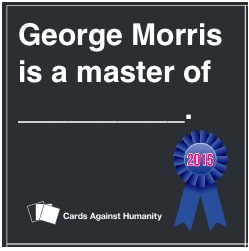 The party game for horrible people just got an equestrian twist.

How does one best describe the game Cards Against Humanity? It’s kind of like Apples to Apples, if all the apples were sour — the all-grown-up, totally irreverent, discomfort-inducing version of the family-friendly card game. Played in a group, individual players take turns acting as judge, drawing a black card and reading it aloud. Black cards are a question or a sentence with blanks. The other players then submit white cards out of their own playing hands; the white cards are nouns that answer the question or fill in the blank. The judge selects what he or she thinks truly completes the statement and that submitter wins the point.

Each deck comes with a few blank cards so you can write in your own shenanigans … so imagine our delight when we discovered that Horse Nation readers were substituting in their own equestrian suggestions:

And we agreed with them that Cards Against Equestrians does, in fact, need to be a thing. So we came up with a few suggestions of our own, filling in our own white cards (the nouns) and pairing them with black cards from the game.

Of course, we could play the game the other way around, too, and fill in our own black cards … completed by white cards already in the game:

Are you a Cards Against Humanity player? Ever written in your own equestrian-themed blank cards? If they’re considered “safe for work,” share them in the comments section!