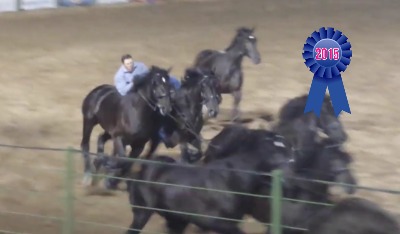 Monday is the crappiest day of the week … but nothing’s crappier than when your six-horse Roman hitch comes apart while you’re performing. Check out this amazing (and maybe terrifying) video of Jason Goodman’s Percheron Thunder.

We’re big fans of Jason Goodman and his incredible feats of horsemanship, driving six Percherons at a big trot and rolling canter Roman-style with only the lines, his voice and hours upon hours of careful training keeping them together. However, even the best-trained teams can make mistakes, and even the most practiced of performers can have an accident. In July of this year while performing at the Ogden Pioneer Days Rodeo in Utah, that’s exactly what happened.

It’s still a little unclear exactly what happens, but it looks like one of the wheel horses (the hindmost team upon which Goodman stands) either took a misstep or somehow got out from under Goodman, causing Goodman to fall between the horses. The sudden release of tension in the lines sent the leaders and swing team into a run, and the situation escalated quickly. Fortunately, Goodman was able to grab a big chunk of mane on each of his wheel horses and hang on, his hands still on the line, despite one of the swings slipping its bridle in the mayhem. Ground crew tentatively tries to help out and then realizes that when six one-ton Percherons decide to go somewhere, few things on earth are going to stop them.

While the scene looks out of control for a few minutes, Goodman hangs on and eventually the team gathers up by the out-gate. Goodman is able to swing aboard one of his wheelers and get things back under control. According to video comments but not shown in this video, Goodman rebridled the loose horse and took one more lap as though nothing had even happened!

An “Oh Crap” moment indeed — but also quite a feat of strength and horsemanship in getting everything back under control. Jason Goodman, we salute you and Percheron Thunder!