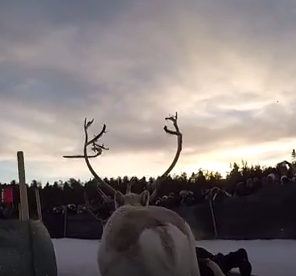 Reindeer racing is a beloved tradition of Jokkmokk’s Winter Market, a 400-year-old annual event held the first weekend of February in the Swedish Lapland. Its history dates back to the 17th century, when the indigenous Sámi people gathered to trade while the government conducted business such as holding court and collect taxes.

Being held during the coldest part of the year had its advantages, as frozen waterways provided excellent passage for the merchants, state officials and men of the church. Today it is Europe’s largest winter festival, featuring three days of Sámi handicrafts, traditional food, exhibitions and competitive events like dog sledding and reindeer racing.

Reindeer have always been important to the Sámi both as a cultural symbol and as livestock providing the food and clothing that was essential to their survival. Many Sámi families still herd reindeer, moving them back and forth between Sweden and Norway according to the season. The Jokkmokk’s Winter Market celebrates the animal with events such as a reindeer caravan and, of course, the popular races! Take a virtual ride along via this POV cam video: