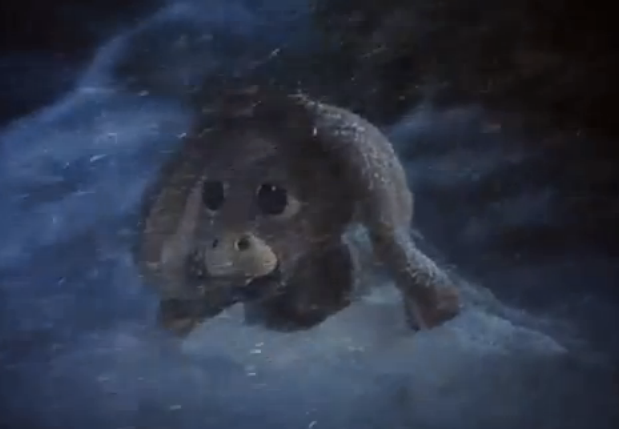 This stop-motion animation about a long-eared donkey is guaranteed to steal some Rudolph thunder.

The story starts off in the Roman Empire, where we are introduced to Olaf the donkey breeder. Olaf isn’t very nice to his smallest donkey, Nestor. In fact, nobody is nice to the little champ because he has really long ears. Plus, this is a Christmas flick, which for some reason always has to start out with ostracizing the character that eventually saves the day.

Carrying on… On the night of the winter solstice, Roman soldiers break into Olaf’s barn and steal most of the donkeys. They throw Nestor back after seeing his “unsightly” ears.

Olaf (rather than judging the tyrannical nature of his society) blames his misfortune on Nestor and casts him out into the blizzard. Nestor’s mother breaks out of the barn to save him, only to sacrifice her life to keep him warm through the night. Good grief– could this be any more depressing?

Nestor then meets a prophetic cherub who tells Nestor to head for Bethlehem. Upon reaching the desert, Nestor boards at a merchant’s stable. Unfortunately, the little dude just can’t catch a break and everyone makes fun of him there too.

But then a notorious couple, Mary and Joseph, comes through the stable in need of a ride. Of course they pick the gentle-eyed Nestor! On the way, a terrible sand storm blows in, blocking their view of the guiding star. Good thing they have a long eared donkey! A long eared donkey with VERY sensitive hearing! Nestor follows the sound of the angels and carries Mary, and her precious progeny, to Bethlehem.

In traditional Christmas fare fashion, everyone eats humble pie and proclaims Nestor the most awesome donkey ever to exist. Olaf even gives the little guy a piggyback ride, much to the dismay of the brown cow.

My favorite donkey cartoon is still The Small One, but to me it’s not Christmas without claymation and this was a nice change from Rudolph. The story was cute (if you don’t think about it too hard) and the soundtrack was very country Christmas.