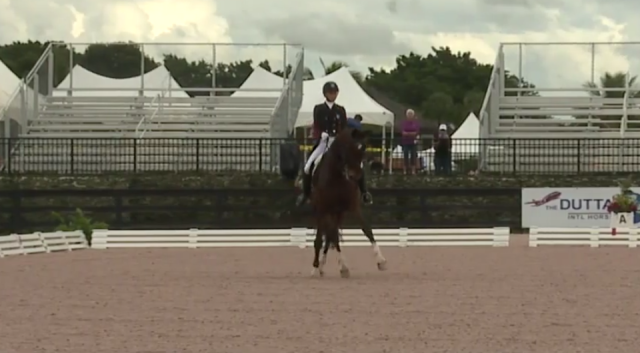 Laura Graves and her Verdades proved that they’re an up-and-coming duo to watch, capturing their first National Championship in Wellington, Florida over the weekend. Watch their outstanding Grand Prix tests!

Modified from a USEF press release:

Laura Graves and her Verdades increasingly demonstrate that they’re a truly world-class pair that we should all be keeping an eye on: helping to win team dressage gold as well as an individual silver at the Pan-Am Games, as it turns out, is just the beginning. Over the weekend, the pair marked scores of 76.460%, 77.137% and 75.125% in the Grand Prix, Grand Prix Special and Freestyle, respectively, at the U.S. Dressage Festival of Champions in Wellington, Florida. This is Graves’ first ever National Championship title, crowning a stellar 2015 year.

Graves and Verdades won the first two segments, finishing second to Steffen Peters and Legolas 92 in the freestyle — which if you ask me, is pretty much a victory in and of itself.

“He’s been feeling really good all week and tonight was a demonstration of how much horse I have now,” explained Graves in a USEF press release. “I am still on a sharp learning curve and am still learning to ride that horse in that environment. This was our first outing [since the Pan American Games in July] and was a perfect opportunity to figure this out now going into our World Cup qualifiers. He is amazingly athletic and when he goes like that the feeling is unreal. We had some mistakes tonight, but I can’t hold that against my horse.”

Speaking to the feeling of securing her first National title, Graves said, “I’ve never been close to this position before so it’s a real honor. This is a really encouraging place to be as we begin 2016.”

Watch Laura Graves and Verdades perform in their two Grand Prix tests. (Unfortunately, the pair’s freestyle is not yet available on video.)