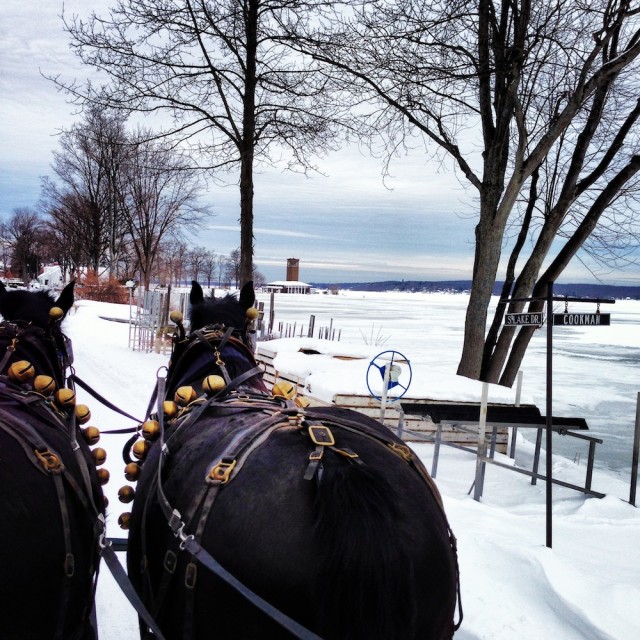 We sing about them, decorate our Christmas cards and ugly sweaters with them, and love to hear the sounds of a horse-drawn wagon or sleigh bedecked in bells. But why bells? 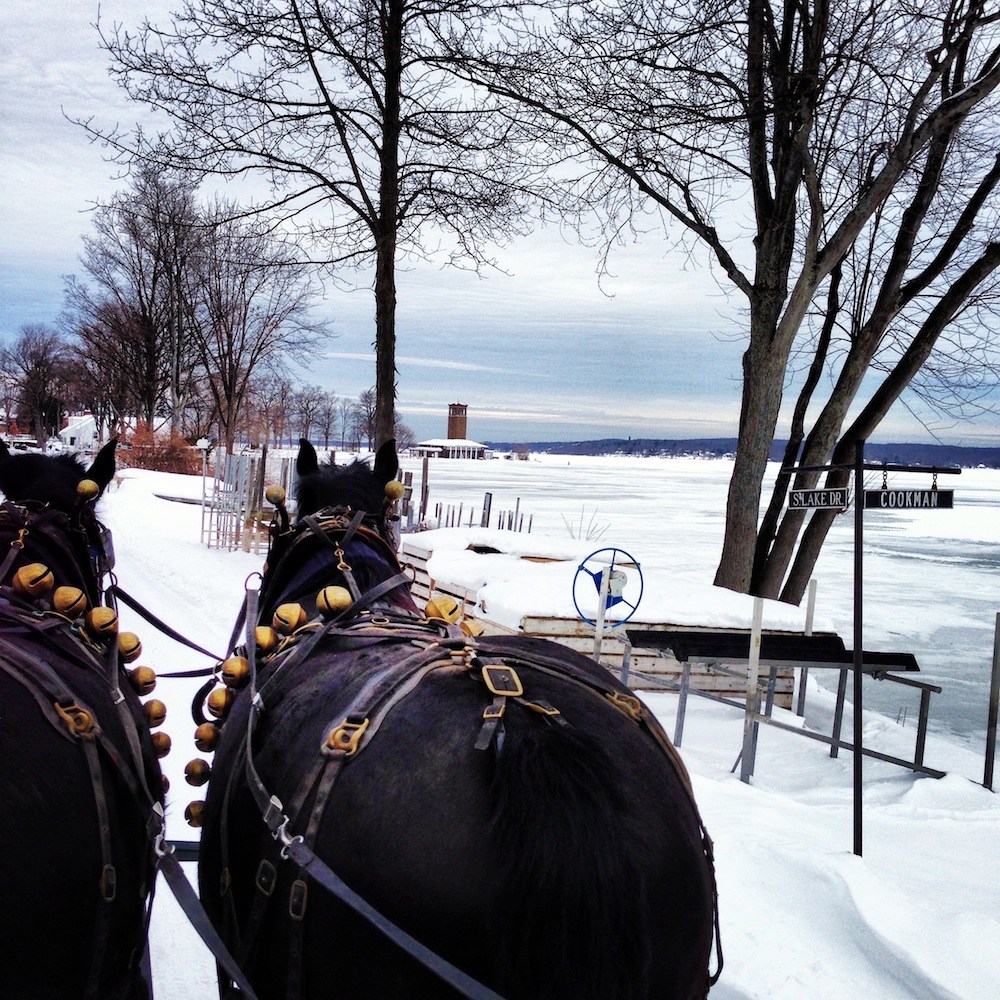 Sleigh bells ring, are you listening? Photo by Kristen Kovatch.

Arguably the official “sound” of the holidays, the jingling of sleigh bells instantly puts a listener in the mindset of Christmas. (Don’t believe me? Flip on the radio to virtually any station this time of year and you can tell within seconds if you’re listening to a holiday song —  you’ll hear sleigh bells in the background.) One-horse open sleighs are, of course, jingling all the way, and it’s a well-known fact that Santa’s reindeer also wear bells. But why? Who decided that putting bells all over a sleigh and harness were festive?

Look out, coming through

Like other forms of equine ornamentation, bells on the harness, tack or horse itself were used as charms: they were said to bring good luck, ward off evil and protect against disease and injury. Additionally, bells and ornaments were a great way to show off your wealth and status: bells and other charms have been in use since at least 800 BC.

For more practical purposes, however, bells were a good “early warning” system to pedestrians and other folks on the road that horses or horse-drawn vehicles were heading their way. For horse-drawn livery or vendors, the bells also served as a commercial to let potential customers know they were in the area — kind of like an old-school ice cream truck.

In both Europe and the United States, sleighing became a popular form of recreation in the winter as well as a method of transportation in the nineteenth century. Therefore, horses and sleighs were turned out spotlessly with plenty of decoration, including rich strings of harness bells — again emphasizing the wealth and status of the owner. The sound of harness bells became inextricably linked with winter activity, especially around Christmas, and an icon was born. 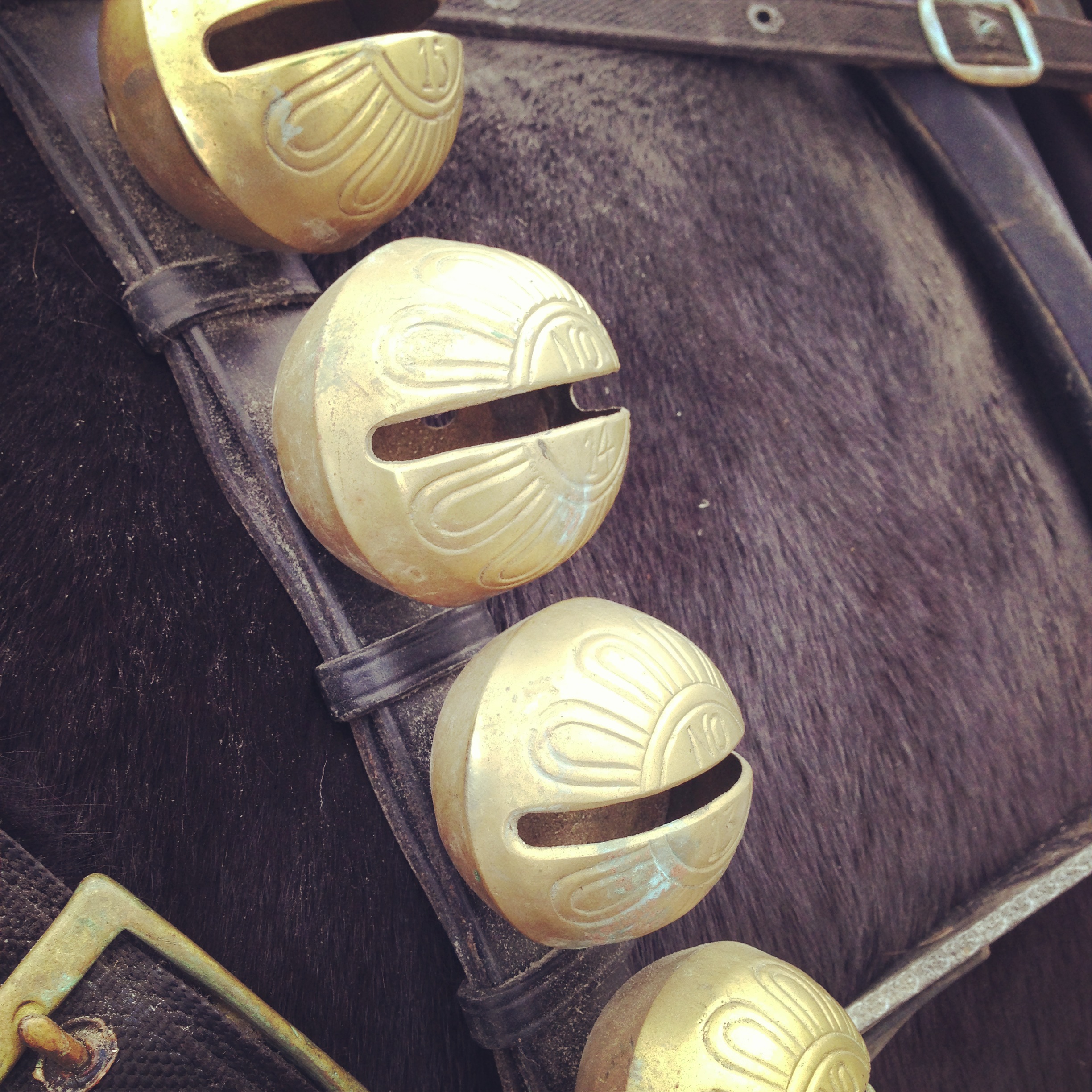 Bell manufacturers began to shape an industry in the eighteenth century, casting their makers’ marks and ornate designs on individual bells. Bells were cast until the end of the 1800s, when an American manufacturer developed a process to stamp bells out of sheet metal, greatly expediting the production process.

However, as horse-drawn transport faded with the advent of the automobile, so did the bell makers: only a handful of the old manufacturers are still producing the classic bells and many strings still used today are vintage relics from days gone by.

Individual makers aside, a bell is a bell, right? Not quite: within the category of “sleigh bells” there are a number of ways to classify the individual bells: shape, throat style, decoration and construction. It should also be noted that what we think of as a traditional sleigh bell — a pellet trapped within a hollow globe — is actually called a “crotal” and is technically a rattle, not a bell. (I warned you that this article included things you never knew you never knew.)

Shape: Crotal bells for harness purposes are commonly seen in a few shapes: round or egg-shaped bells were called arctic or globe bells by the makers. Round bells with a flared ridge were also popular. Less common shapes include the bevel or band bell with a slightly pointed face; square bells look impressive but are said to sound absolutely terrible (and are also quite fragile). Other specialty custom bell shapes include acorns or flower buds.

Traditional and authentic bells, with an open mouth and a clapper, were used on occasion and are still found on European working harnesses with one bell suspended between the hames.

Throat: The “throat” of the bell refers to the number of slits, which allow the bell to vibrate and therefore ring. Before the heydey of the sleigh bell, most cast harness bells were designed with a broad single throat, which gave them a rich tone much like an open-mouthed “liberty” bell. To add distinction to their bells in the 1800s, manufacturers started adding a second and sometimes even a third throat, which gave the bells a softer chime, or jingle — the kind of sleigh-bell sound that’s familiar thanks to the miracles of Christmas pop recordings. Most of these multiple-throat bells were stamped rather than cast, allowing for new and unusual shapes. 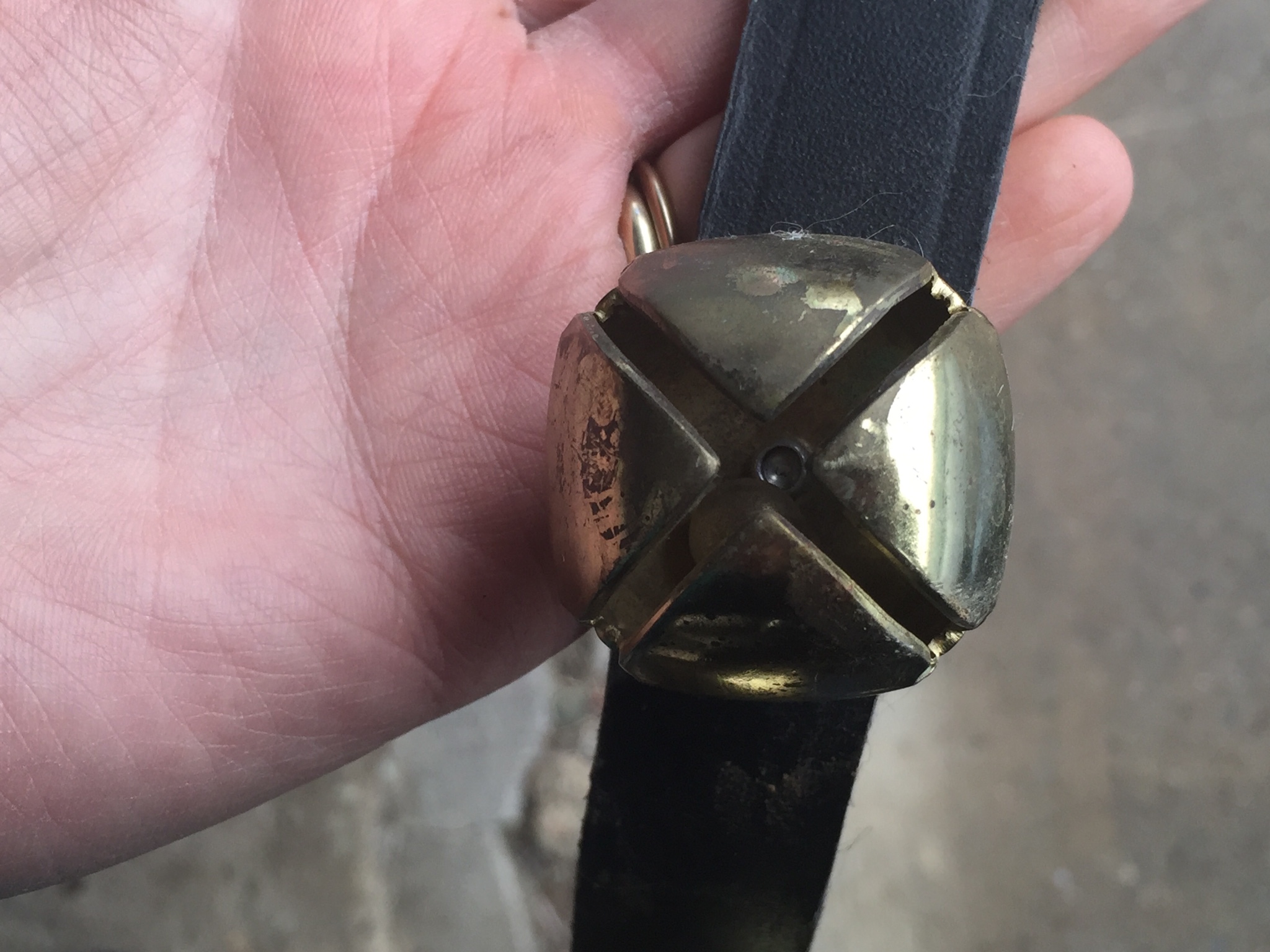 An exception to these rules is the Swedish bell, typically a very large bell up to two or three inches in diameter. These bells are distinctive because of the six “pie slices” formed by the narrow throats that were cut into the bell rather than cast. Their hefty size gives the Swedish bells a deep and loud tone. 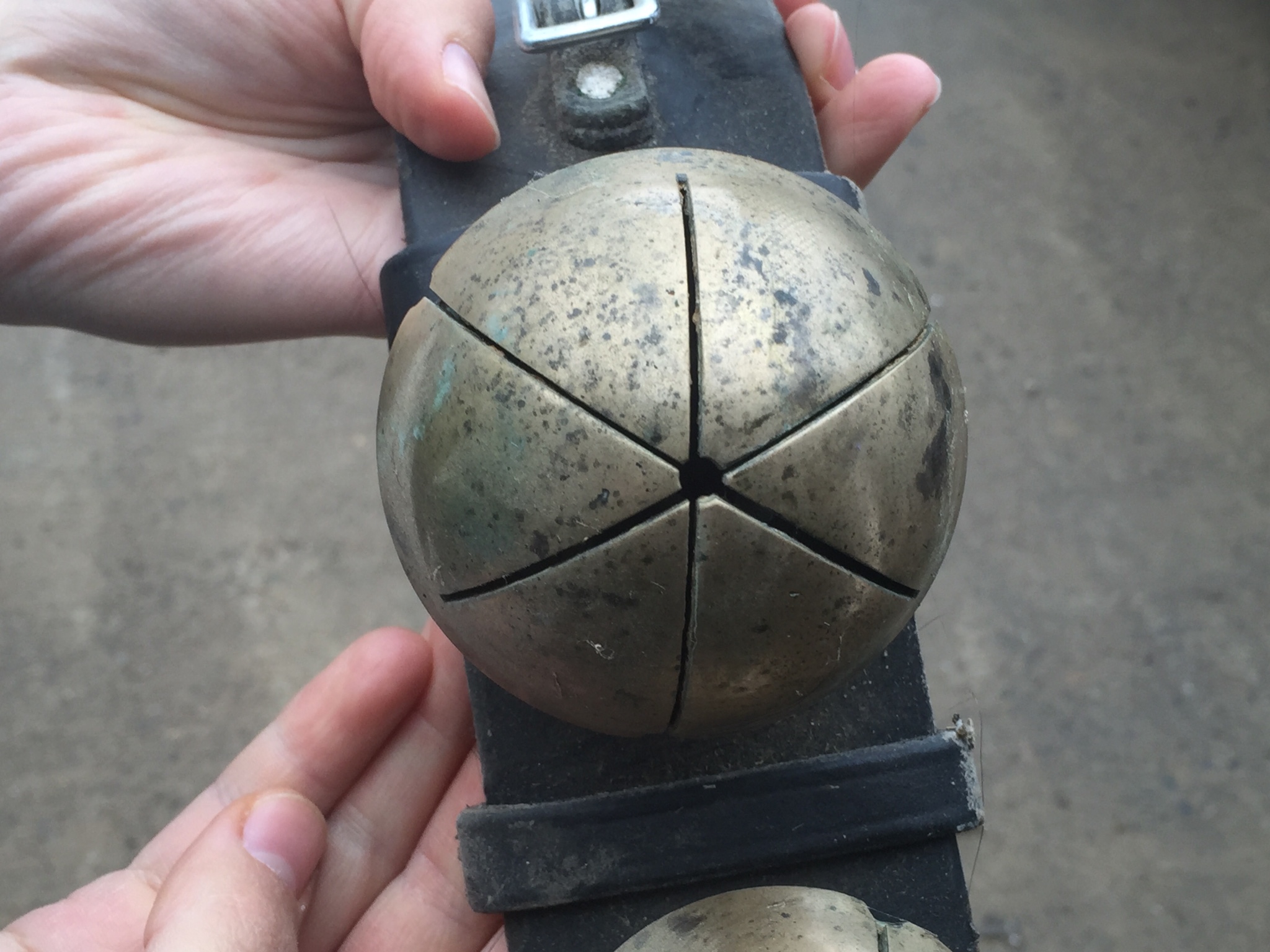 Swedish bell on a hip strap. Photo by Erik Bentley.

Decoration: Old traditional cast bells from Europe commonly carried a petal or horseshoe design and were subsequently referred to as “petal bells.” Individual makers might include their initials, or perhaps the size of the bell. As styles changed and stamped bells became vogue, bells were left undecorated and were polished to a shine. Individual specialty antique bells can still be found with fish-scale or ornate petal designs, but these are much less common. 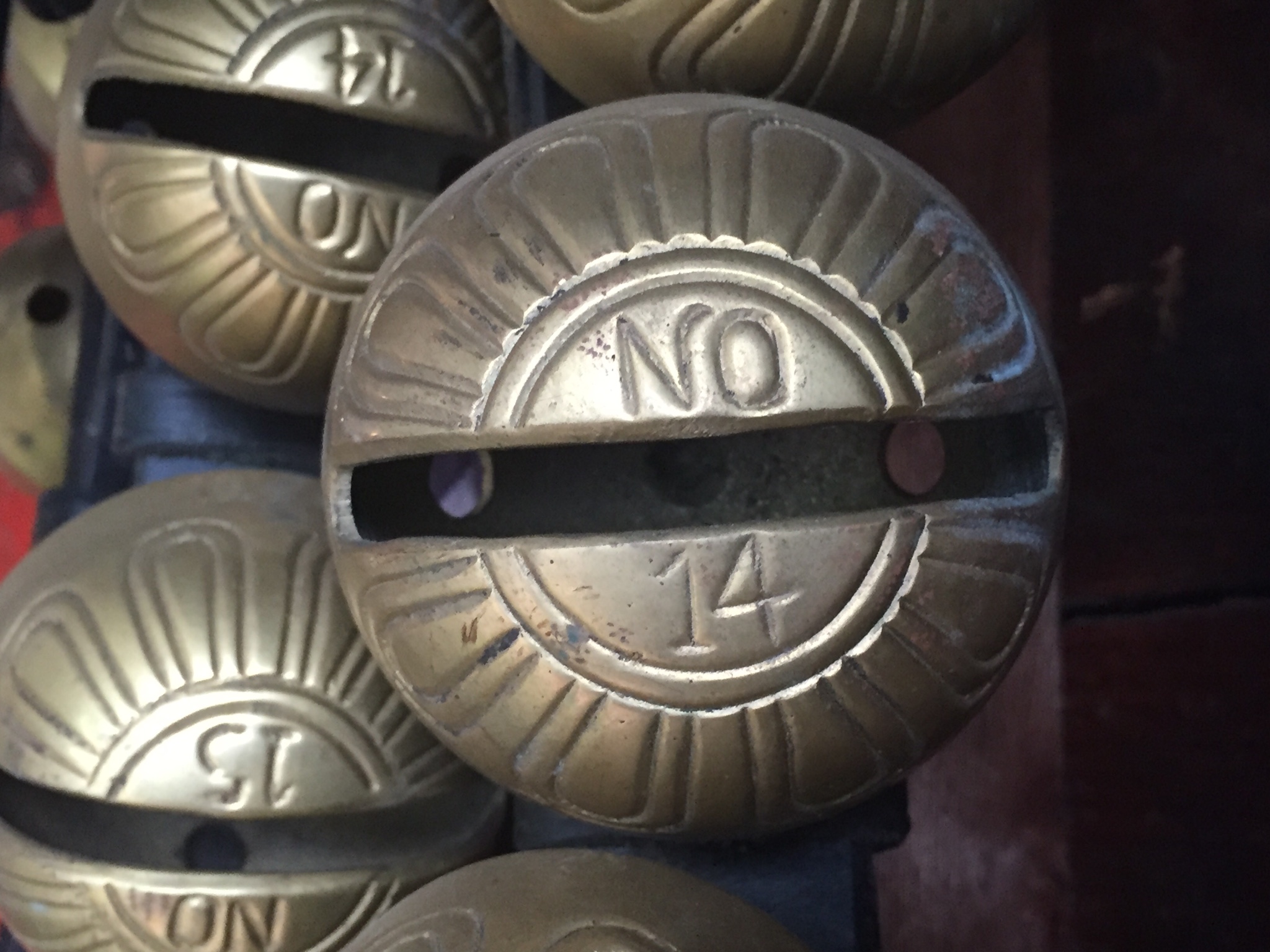 Construction: As mentioned above, harness bells were originally cast in brass. The process of metal stamping revolutionized the bell-making industry as well as the tonal qualities!

Okay, now that you’ve finally selected what style of bell you’ll be using, you need to look at your horse and harness and decide where to put these things.

Body strap: Arguably one of the more common places to put your bell string, the body strap buckles over the traces of the harness around the horse’s middle. Body straps can come in the New England style, in which all of the bells are the same size, or the graduated style, in which bells get smaller as you travel down the strap. Less common body straps are the pony strap, which includes a double-row of small bells (so named because of the size of the bell, not the animal!) or the all-metal Sunday strap which would be used only on special occasions. A warning: even the most careful driver may sometimes get a line caught up in the bells. Because of the body strap’s location, bells are more prone to becoming broken, scraped off or gummed up with mud and ice.

Neck strap: Perhaps a safer option than the body strap, the neck strap simply places those bells around the horse’s neck or collar. Bells might all be one standard size or they may be graduated.

Hip straps: Usually just a few bells make up a hip strap, which slides onto the back strap of the harness and hangs down over the horse’s lower back or hips. The hip strap is a common place to find Swedish bells with their deep voices.

The above information can all be referenced to Classic Bells‘ thorough history!

And what about the sound?

No discussion of sleigh bells would be complete without listening to a few examples!