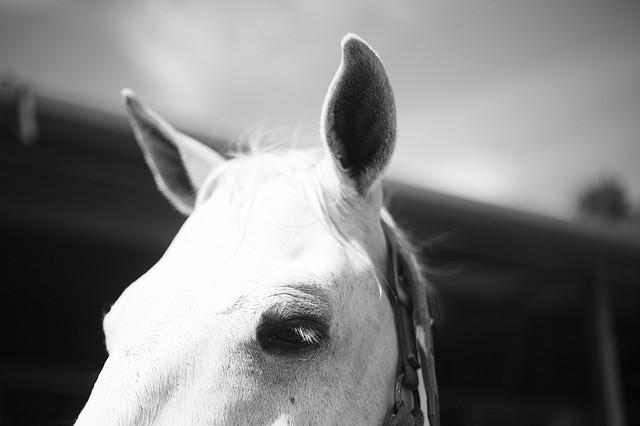 This week we look at the science behind horses’ sensitive hearing.

What you think of as the”ear” is called the pinna.

The pinna collects sound waves and funnels it through the external ear canal. Then the sound waves go to the middle ear, which triggers the ear drum to vibrate. The vibrations are sent to the ossicles, where three tiny bones send the sounds to the inner ear. The sound waves then vibrate in the cochlea, where sensitive hair cells act as transducers. When the hair cells bend, an electrical signal stimulates the auditory nerve that send impulses to the brain.

All those muscles aid in the 180 degree movements of the pinna. For comparison, humans have only three auricular muscles that are pretty much useless. In response to directional sounds, a horse flicks an ear towards the source. This is called the Pryer Reflex. If the noise warrants more intense investigation the horse pricks both ears forward – turning to look in the direction of the source – to focus the sound waves.

Horses hear at lower and higher frequencies than humans.

A University of Kentucky paper, published in 2009, revealed horses can hear low to very high frequency sound, in the range of 14 Hz to 25 kHz. For comparison, the human range is 20 Hz to 20 kHz. An earlier paper, published in 1983 by the American Pscyhological Association, gave horses a much wider range of hearing, 55 Hz to 35kHz. The difference in results is best explained by research done with elephants.

O’Connell-Rodwell,  a biologist at Stanford University in Palo Alto, California, exposed a captive elephant at the Oakland Zoo to increasingly lower levels of vibration to determine how sensitive elephants were to seismic activity. The “test subject” showed increasing sensitivity to the tests. The learning curve suggested the elephant previously filtered out the seismic environment as noise. After she understood the task, she focused more attention on it.

Leanne Proops, PhD, of the Mammal Vocal Communication and Cognition Research group at the University of Sussex, in the United Kingdom, evaluated 72 horses that each heard one of two recorded voices saying the horse’s name. Two people stood in front of the horse while the recording played over a loud speaker, one was familiar and the other a stranger. The study found when the voice belonged to someone the horse knew, they would almost always look to that human quickly and for a longer duration.

“When we hear a familiar voice we form a mental picture of who spoke,” explains lead researcher Dr. Leanne Proops. “We match visual and auditory cues to recognize specific individuals. Previously we showed that horses also identify other horses cross-modally. We now demonstrate how flexible this ability is by showing that horses can also recognize humans in this way, despite people looking and sounding very different [from horses.]”

Horses might be able to predict earthquakes through sound.

Science is torn on this one.

“What we’re faced with is a lot of anecdotes,” said Andy Michael, a geophysicist, to National Geographic. “Animals react to so many things—being hungry, defending their territories, mating, predators—so it’s hard to have a controlled study to get that advanced warning signal.” In the 1970’s, a few studies on animal prediction were done by the U.S. Geological Survey “but nothing concrete came out of it,” stated Michael.

What has been proven is that horses can transmit vibrations from the ground to the middle ear via the hooves, teeth and jawbone. The same phenomenon has been well researched in elephants. Whether horses can hear, feel or simply “sense” an impending disaster remains a mystery.