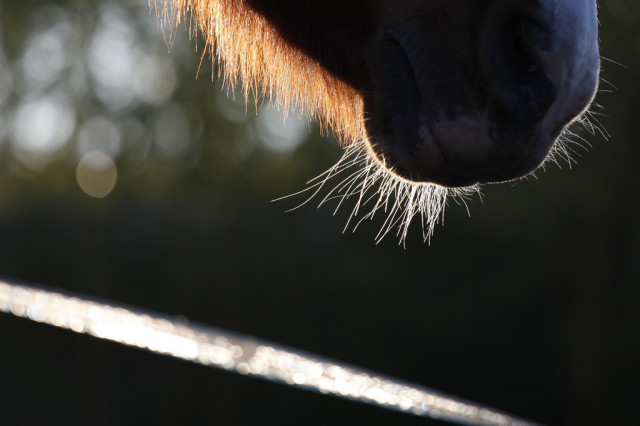 If you read my article on blanketing, you might ascertain that I am a pretty practical person. I’m not into “fads” or making emotional decisions in running my life or the lives of my animals. Practicality should win the day. Therefore I tend to get a bit perturbed about faddish, emotional rants — I mean, uh, “scientific findings” — that try to dictate the care of my animals, especially my horses. Because I sink so much of my hard-earned income into the care of my horses, it behooves me to take particularly good care of them. So when I see a fad spreading like wildfire that has questionable “scientific” findings, I am of course going to be highly skeptical and in the end make the decision myself based on what is best for my horse on any given day.

The emotional argument against shaving whiskers

The finding that whiskers are sensory receptors is not new. We all knew this about cats, right? So that part is a no-brainer. But here are some of the comments that show up on each “horse whisker” study.

“I believe it is cruel.”

“There is no good reason to do so, and at least one bad reason.”

“I don’t trim the cats whiskers either!” (This theme was repeated several times, as if a cat’s life is anything like a horse’s.)

“They are used as feelers, so they serve a purpose. People are a horse’s biggest problem.”

“Whiskers are needed for testing the electric fence, among other things!” (Okay, I just found that one hilarious.)

“Animal cruelty to do so!” (Lots of responses like this, probably from people who have never owned a horse.)

“I understand their chin hairs help them determine what plants are toxic and which are not.” (Um, no, that’s what the sense of smell and taste is for.)

I’ve trimmed whiskers (on the muzzle only) and have never once seen a negative effect of trimming on my own horses. I even have a couple of horses that really get into it, like they are at a barber shop: they will present their chin and “help” me get the job done.

It’s true that some horses are highly annoyed by it in the beginning (after all, it sounds and feels like a bunch of angry bees!), and care has to be taken not to poke them with the trimmers or give them trimmer burn. However, I have never once seen a negative side effect of removing whiskers. Trimming whiskers has been compared to “wearing a pair of gloves” … well, I wear gloves all winter. Does it interfere on occasion? Yes. Is it a big deal? NO!

Most of the people trimming whiskers are competitive show riders who want their horses to look neat and tidy. Many horses are actually bothered by long whiskers getting stuck and pulled by halters, bridles or bits … even hackamores and bitless bridles can irritate a horse by pulling on those long hairs. Ever have your unshaved horse jerk away while you were bridling it? You might want to take a second look at those whiskers.

Most of the time there will be zero effect to trimming whiskers, though there are a few exceptions: horses who have diminished eyesight, are blind, stay outside in the dark (especially among trees) and don’t have any real reason to be trimmed probably should not be trimmed. They need all the help they can get. However, a stalled horse, a horse who doesn’t like its whiskers being pulled or a show horse who needs a neat and tidy turnout in the show ring can have its whiskers trimmed without any noticeable side effect. It’s not abuse: horses adjust. They adjust to us trimming them, putting saddles on them and putting bits in their mouths. It’s just another part of owning a horse. You do what is best for the horse, while still enjoying them as a riding partner. Using some common sense in this area is a really good idea!

I agree with the comments about trimming “eyelashes,” or what I call eyebrows —  those really long hairs that grow around the eyes. If a horse bumps its nose because its whiskers are shaved, it’s usually not a big deal. But eyes are a bit more important and fragile than the muzzle and should be protected. Eyelashes and eyebrows should be left alone. To me, this safety measure is as important as wearing your helmet while riding, and just good common sense. Eyebrow whiskers also don’t have the habit of getting stuck in anything like muzzle whiskers as nothing is worn over the eyes, except the occasional fly mask. Leave those hairs alone; they are important.

While a closely-trimmed ear looks very nice, those hairs inside the ears protect the ear from foreign objects falling into it. Trimming the outside edge of the ear to tidy it up and cleaning the ear out regularly is a good idea, but keeping all of the hair out of the ear all the time can actually lead to health issues. Conversely, having a giant hair ball inside the ear is also a bad idea, so check the ears regularly especially where ear plaque is present. Removing some of that hair will help dry out the ear plaque. Soggy ears tend to promote plaque growth.

The downside to NOT shaving ears is that people tend to not check inside the ear once in a while. Ear hair does not keep a horse’s ears from being plagued with pests or protect from all issues, so regardless of whether you shave the ears or not, keep an eye on them!

If you personally feel that trimming the muzzle whiskers is a bad thing to do for your horse, then don’t do it! At the same time, don’t judge and condemn those who feel it’s the right thing to do in their own situation (the same with blanketing, shoeing, bitting and so on). If you feel you need to get on a moral bandwagon on a subject, go picket someone who’s horses are literally starving to death or harass the people that are beating their horses bloody. There are certainly much better ways to spend one’s time than getting into an emotional uproar over a few whiskers. Let’s stick with fighting over what is truly important, shall we?

Jody Webb is the “Solepreneur” of AverageJo Equine, with a line of all natural supplements for horses and dogs. Her Wild Horse and Wild Dog line of products is the focus of years of research with the goal of taking your pets away from chemical laden feeds and supplements and taking them back to as close to nature as is possible in a tamed environment. With her three horses, two dogs, two cats, various rescue horses and their individual issues, there are plenty of willing volunteers with which to perfect each product. This desire came upon finding her then new horse Gideon was suffering from a metabolic disorder called EPSM. Though this disorder can never be cured and there will always be lifelong health issues for Gideon, he has gone from a cranky, underweight and severely in pain train wreck to a sassy and healthy looking beast! Jody is now taking her knowledge learned from owning such a difficult animal to moving on and helping other horse and dog owners have healthier, happier pets. Her writing comes out of the joys and pains of owning such a challenging animal. Learn more about all-natural horse products at Jody Webb’s blog, WildHorseProducts.com.