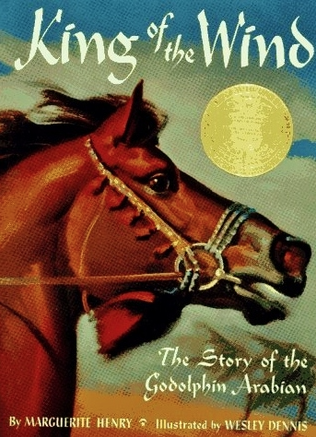 There are 803 books listed as “Horse Books” on Goodreads. Here’s the top ten as voted by readers.

“A horse is a horse of course unless of course the horse is Black Beauty. Animal-loving children have been devoted to Black Beauty throughout this century, and no doubt will continue through the next. Although Anna Sewell’s classic paints a clear picture of turn-of-the-century London, its message is universal and timeless: animals will serve humans well if they are treated with consideration and kindness. Black Beauty tells the story of the horse’s own long and varied life, from a well-born colt in a pleasant meadow to an elegant carriage horse for a gentleman to a painfully overworked cab horse. Throughout, Sewell rails – in a gentle, 19th-century way – against animal maltreatment. Young readers will follow Black Beauty’s fortunes, good and bad, with gentle masters as well as cruel. Children can easily make the leap from horse-human relationships to human-human relationships, and begin to understand how their own consideration of others may be a benefit to all.”

2. The Black Stallion by Walter Farley

3. King of the Wind: The Story of The Godolphin Arabian by Marguerite Henry

“He was named “Sham” for the sun, this golden red stallion born in the Sultan of Morocco’s stone stables. Upon his heel was a small white spot, the symbol of speed. But on his chest was the symbol of misfortune. Although he was as swift as the desert winds, Sham’s proud pedigree would be scorned all his life by cruel masters and owners. This is the classic story of Sham and his friend, the stable boy Agba. Their adventures take them from the sands of the Sahara to the royal courts of France and, finally, to the green pastures and stately homes of England. For Sham was the renowned “Godolphin Arabian” whose blood flows through the veins of almost every superior Thoroughbred. Sham’s speed-like his story-has become legendary.”

4. Misty of Chincoteague by Marguerite Henry

“On an island off the coasts of Virginia and Maryland lives a centuries-old band of wild ponies. Among them is the most mysterious of all, Phantom, a rarely seen mare that eludes all efforts to capture her–that is, until a young boy and girl lay eyes on her and determine that they can’t live without her. The frenzied roundup that follows on the next “Pony Penning Day” does indeed bring Phantom into their lives, in a way they never would have suspected. Phantom would forever be a creature of the wild. But her gentle, loyal colt Misty is another story altogether.”

“Seabiscuit was one of the most electrifying and popular attractions in sports history and the single biggest newsmaker in the world in 1938, receiving more coverage than FDR, Hitler, or Mussolini. But his success was a surprise to the racing establishment, which had written off the crooked-legged racehorse with the sad tail. Three men changed Seabiscuit’s fortunes:Charles Howard was a onetime bicycle repairman who introduced the automobile to the western United States and became an overnight millionaire. When he needed a trainer for his new racehorses, he hired Tom Smith, a mysterious mustang breaker from the Colorado plains. Smith urged Howard to buy Seabiscuit for a bargain-basement price, then hired as his jockey Red Pollard, a failed boxer who was blind in one eye, half-crippled, and prone to quoting passages from Ralph Waldo Emerson. Over four years, these unlikely partners survived a phenomenal run of bad fortune, conspiracy, and severe injury to transform Seabiscuit from a neurotic, pathologically indolent also-ran into an American sports icon. Author Laura Hillenbrand brilliantly re-creates a universal underdog story, one that proves life is a horse race.”

6. My Friend Flicka by Mary O’Hara

“It seems Ken can’t do anything right. He loses saddle blankets and breaks reins…but then comes the worst news yet: a report card so bad that he has to repeat a grade. How can you tame the dreamy mind of a boy who stares out of the window instead of taking an exam? Enter Flicka, the chestnut filly with a wild spirit. Over the course of one magical summer, both will learn the meaning of responsibility, courage, and, ultimately, friendship.”

7. The Horse Whisperer by Nicholas Evans

“His name is Tom Booker. His voice can calm wild horses, his touch can heal broken spirits. And Annie Graves has traveled across a continent to the Booker ranch in Montana, desperate to heal her injured daughter, the girl’s savage horse, and her own wounded heart. She comes for hope. She comes for her child. And beneath the wide Montana sky, she comes to him for what no one else can give her: a reason to believe …”

“On a desperate journey, two runaways meet and join forces. Though they are only looking to escape their harsh and narrow lives, they soon find themselves at the center of a terrible battle. It is a battle that will decide their fate and the fate of Narnia itself.”

“A powerful tale of war, redemption, and a hero’s journey. In 1914, Joey, a beautiful bay-red foal with a distinctive cross on his nose, is sold to the army and thrust into the midst of the war on the Western Front. With his officer, he charges toward the enemy, witnessing the horror of the battles in France. But even in the desolation of the trenches, Joey’s courage touches the soldiers around him and he is able to find warmth and hope. But his heart aches for Albert, the farmer’s son he left behind. Will he ever see his true master again?”

“A raging storm slashes across Assateague and Chincoteague islands. Water is everywhere. The wild ponies and the people must battle for their lives. In the midst of the storm, Misty-the famous mare of Chincoteague-is about to give birth. Paul and Maureen are frantic with worry as the storm rages on. Will Misty and her colt survive? This is the thrilling story of the hurricane that destroyed the wild herds of Assateague, and how strength and love helped rebuild them.”

Be sure and check out the complete list on Goodreads!