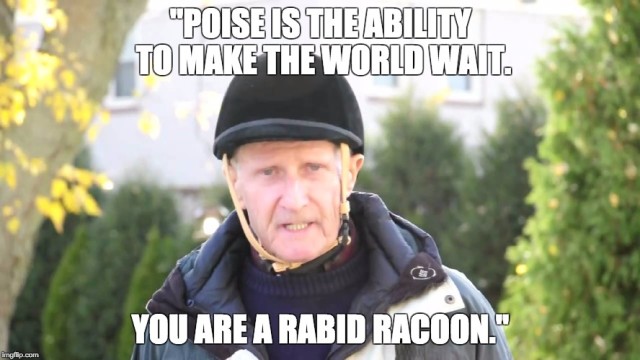 This past weekend I had the absolute privilege of attending a George Morris clinic in Wilsonville, Oregon. I am primarily a dressage rider, but have begun to dabble in the jumpers with my horse, Kalvin, who was dissatisfied with a dressage-centric lifestyle. I was hoping to gain some useful insight on riding him, which I did, but if I’m being honest with myself, I really just wanted to watch George yell at people. That is what he is famous for, and that is what we expect. George did not disappoint. He began the clinic by giving a stern talking to a group of spectators who were fawning over a dog when he was trying to begin.  “This is a riding clinic!” he said. “Not a dog petting clinic!”

Throughout the day George was tough on riders, spectators, and the jump crew just as expected, but in addition to a bit of a show and some good jumping advice, I got something quite unexpected out of the clinic, a full-on dressage lesson. It turns out that George is a student of the classical German school. He stressed the importance of keeping the horse in front of the leg and had riders schooling shoulder-in, renvers, and travers during the flat portions of the lessons. He was also quite generous with praise when it was due, and given the quality of horses and riders at the clinic, praise was frequent. The highlight of the clinic was the last group of riders which included Olympian and World Cup Champion, Rich Fellers, along with his wife, Shelly, who is quite the rider in her own right. Watching George teach such a talented group was a real pleasure and truly inspirational.