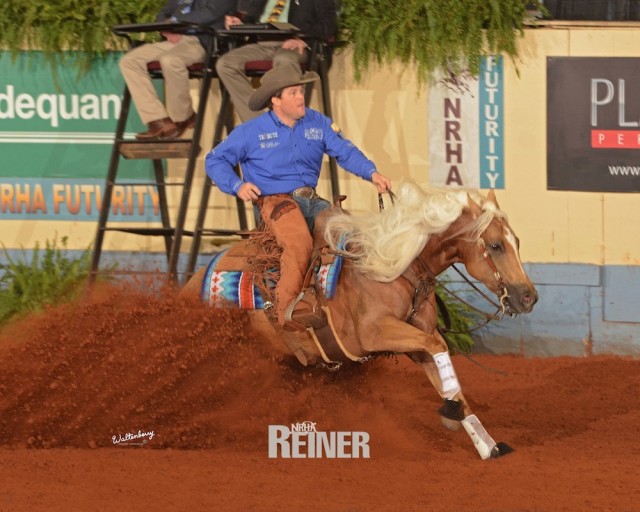 Casey Deary and Shesouttayourleague. Photo by Waltenberry, courtesy of NRHA.

The National Reining Horse Association (NRHA) Futurity just wrapped up in Oklahoma City, drawing the best horses and riders from all over the continent to compete for top honors as well as some sweet prize money. The open finals turned into a nail-biter, when Casey Deary and Shesouttayourleague tied Franco Bertolani and Inferno Sixty Six for the lead. Rather than being crowned co-champions, Deary and Bertolani ran off a second performance to settle the tie.

As one fan so eloquently put it, the aptly-named Shesouttayourleague “gives new meaning to ‘willingly guided,'” the rulebook definition of a well-ridden reining horse:

In addition to laying down a textbook pattern in beautiful style, Deary’s win in the Futurity also made him the NRHA’s newest Million Dollar Rider. The fact that Deary reached that milestone in his career at the 50th anniversary of the Futurity with an Open-level win made the new title that much sweeter — and on the back of such a nice mare, who could possibly ask for more?