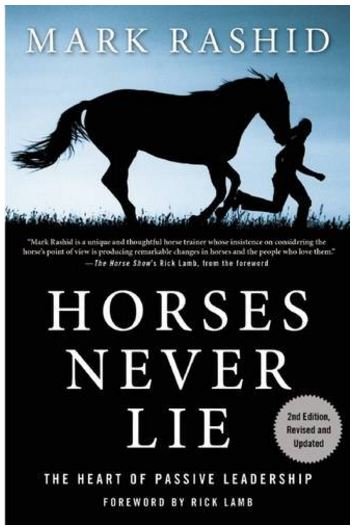 If you’re looking for a step-by-step, one-size-fits-all training method with no heart, Mark Rashid would like to shake up your brain until you find what you’re REALLY looking for: a genuine relationship with your horse.

Mark Rashid is not like a lot of other famous trainers. He disavows exhaustive, goal-driven groundwork, he doesn’t have a “method” that fixes every horse, and his books and clinics aren’t trying to sell you a magic tool or video package. What Rashid and his updated version of “Horses Never Lie” are trying to teach you is a way to connect with your horse in a more philosophical way.

All of Rashid’s work is written in digestible anecdotes that invite the reader to think critically and apply principles widely rather than explaining exactly how to spend 45 minutes in a roundpen. This not only makes the ideas feel more universal, but it also makes for truly enjoyable and stimulating reading.

Rashid begins by laying out the foundation of his principles through stories of his beloved mentor, known simply as “The Old Man,” and also through his observations of herd behavior and dynamics. If you’re unfamiliar with Rashid’s ideas, the thoughtful study of the aggressive alpha leader vs. the passive leader will blow your mind a little the first time you read it. As the reader familiarizes with the concept of being a passive leader (not to be confused with just being passive — boundaries are just as critical to a horse as his freedom) Rashid’s concept is both exhilarating in its possibilities and daunting in its execution. Daunting because it requires such substantial character, critical thinking and follow-through, but exhilarating because of what the success could be to a partnership.

Throughout the book, the reader meets dozens of horses and horsemen that demonstrate the benefits of passive leadership, and Rashid even explains methodically how he helped that particular horse without trying to sell it as the fix for YOUR horse. Brilliantly, Rashid teaches the reader much like he teaches the horse: Create the opportunity for the student to make the right choice and let them decide.

Rashid really hits his stride in the chapter “Finding the Try”. The horses and their stories will leave any reader with the desire to ride with a softer hand, and to look more earnestly for the horse’s inherent desire to please that you might have been missing before. Rashid spends several pages covering the backstory, meeting, training, and ultimate growth surrounding a gelding named Traveler who had been deemed “dangerous” by other trainers. Rashid demonstrates in masterfully simple ways how the horse had been loaded up with neuroses by training methods that had left Traveler fearful and confused, and what he really needed was a leader who could help him make a good choice on his own.

The Second Edition is worth revisiting if you’ve already read the original, as Rashid has included clarifying notes and additional emphasis to help the reader understand his philosophies.

I can’t help but make the comparison between Mark Rashid and Steve Jobs, and that’s not a comparison I make lightly. Jobs revolutionized technology because he was thinking philosophically about the user experience — the human experience, really. Rashid does the same for horses, and if the reader is willing to explore ideas from the “why” perspective instead of the “how” perspective, Rashid’s work may just open up a whole new chapter for the reader and their equine partner.

‘Horse Never Lie: The Heart of Passive Leadership’ is available in paperback here. There are also several other titles from Mark Rashid which you can find here.  Many thanks to SkyHorse Publishing for sharing this title with Horse Nation.