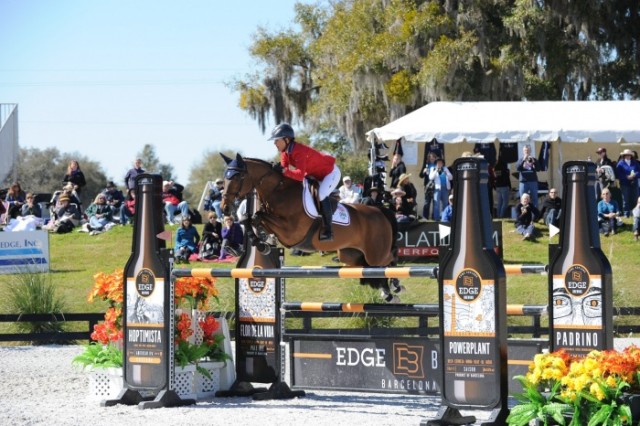 Contributor Lisa Thomas brings us the story of how a new philanthropic effort by Edge Brewing Barcelona helped bring Horses N Heroes back from the edge of closing its doors for good.

Each Friday, Horse Nation teams up with Ovation Riding to spotlight an individual or organization doing good work in the horse industry. Today, we’re recognizing the efforts of Edge Equestrian, the philanthropic vision of Edge Brewing Barcelona, utilized to help save Horses N Heroes of Ocala, Florida.

Horses N Heroes is a 501C based in Ocala and founded by Mindy Nolan-Morrow, a lifelong equestrian who originally grew up showing on the A circuit in the show hunters on the east coast under the tutelage of Ralph Caristo and Harry deLeyer. Mindy is forthright in remarking that she grew up in a family that could afford the equestrian lifestyle, but she always worked hard for it and was a student of the sport. She also had friends who came from affluent backgrounds, and when they were not focused on riding, these girls were finding trouble. Mindy knew that she wanted to take her love for horses and help girls forge their way in the world.

Horses n Heroes is a non-profit organization that helps girls learn life skills and tools through their interaction with and care of horses. Founded in 1994, the goal of Horses N Heroes has been to give girls who come from challenging socio-economic backgrounds the opportunity to ride and to learn respect and responsibility through this equine experience.

“For Mindy, who grew up on Long Island showing and riding, horses were an important part of her formative years. As an adult she has devoted herself to this wonderful mentoring program, partnering children and horses to foster self esteem, responsibility, team work, kind-heartedness, commitment and more.”

Unfortunately due to the recent economic downturn, Horses N Heroes was struggling and faced the real threat of having to close their doors. This is when a coincidental meeting in Las Vegas Nevada would result in Mindy finding her philanthropic angel in Ocala.

The Birth of Edge Equestrian

Kim and Christian Oliver had been working on the concept of utilizing their beer brand to leverage help within the local community. Edge Equestrian had become the philanthropic vision of Edge Brewing Barcelona, with the goal of giving back to the community and the horses that have added such passion to their life. The idea was then set into action for an initial import of their product, which will focus on 2 brands of equestrian beer designated to benefit many area residents and charities.

They chose two of their brews to be rebranded in the USA and they held a local competition to enlist the talent of local artists to create the labels on their new equestrian brews. The winners of the local art competition were graphic designer Andy Stracuzzi and 15 year old student, talented artist and equestrian, Sara Boon. Their beautiful artwork now adorns the labels of the imported beers called Unbridled Passion (formerly Appasionato) and Caballo Loco (formerly Padrino Porter), which literally means horse crazy!

And in another fated connection within the local horse community, Sara Boon, who’s artwork has become one of the Edge beer labels, happens to ride at Kimberden Farm with Ting, the Olivers’ adopted daughter. That particular farm has also donated horses over the years to Horses N Heroes. Mindy loves that a young girl designed the logo for the label that will directly benefit other young ladies in the community.

The beer has already been well received by South Florida beer retailers, whose South American and Latino customer base embrace the idea of a luxury European brand from Spain. The second phase will be to import approximately 10 beers from their product line which will be marketed as a luxury, best in world, European brand.  Edge Barcelona Brewery’s “Give Back Taps”, which are the 2 beers chosen whose profits will be donated, are part of a line-up of about 10 beers that will be available in the US.

On an annual or bi-annual basis, Edge Equestrian would like to bring an equine charity forward that would benefit from a portion of the proceeds from their product sales. Horses-n-Heroes was in financial hardship when this concept took flight, and through the generous donations of Edge Equestrian, that local charity is able to keep their doors open for the immediate future.

During a conversation with Mindy Nolan-Morrow of Horses N Heroes she has expressed her gratitude for meeting with the Oliver’s and how their generosity has given her non-profit a fighting chance.

“They held a cocktail party at The Brick City Center For The Arts in downtown Ocala where they announced the winners of the label artists. They introduced us as beneficiaries to the program and donated $25,000 to basically keep our doors open!”

“I want to thank Edge Brewing Barcelona for their generosity, compassion & dedication to this program and it’s survival. The opportunity they are giving us will enable the girls who benefit from our program to carry us into the future.”

It is a wonderful thing that so many people in the Ocala area have a united goal to help make a difference in lives of local under-privileged kids. Mindy is quick to acknowledge the large budgets needed to ride horses, and in an area where there is an abundance of horse farms, “there are so many pockets of poverty with children in this area who couldn’t otherwise afford to be involved with horses.”

Kim and Christian Oliver are thrilled to be involved, “We are currently cutting our teeth on this Horses N Heroes to see how effective we can be as Edge Equestrian in helping charities and hoping that in the process people will come forward to be Mindy’s donors in coming years. The main reason we are bringing our Edge Barcelona beer to the US is to use it within the equestrian market to bring awareness to charitable organizations. If we can do something good for the equine charities through Edge Equestrian, then it’s worth the effort of importing our product back into the America market.”

Kim also pointed out another tidbit about our hometown of Ocala, “I saw an article about the top 10 areas in Florida for philanthropy based on donations per capita. Ocala was 7th on the list showing that the entire community is very charitable.  Personally, we have found this to be true – people and companies are beginning to step forward to help Horses N Heroes once they know about them. The challenge is getting the word out. We hope that the exposure and press Horses N Heroes gets during the year they are associated with the roll out of our Equestrian line of beers will put them on the forefront of everyone’s minds so they become well-funded far into the future!”

Our friends at Edge Equestrian were not only the presenting sponsor for the film festival but were also involved by submitting a documentary short named Reflections, which was created to bring awareness to Horses N Heroes in Marion County, Florida.

Reflections was written by Chris Wims and directed by Alex Moy of ThatsHowItsDoneProductions, another Ocala based business that focuses on video production and marketing. It was a beautifully produced documentary short that featured the emotional story of the young girls who benefit from the love of Mindy Morrow-Nolan and the 4-legged creatures at Horses N Heroes.

Poster for Reflections, a short documentary.

The Equus Film Festival was held in lower Manhattan at the Village East Cinema and showcased equestrian related films over a two day period and also featured vendors, artists and authors at a nearby pop-up shop location. Headlining full length films included Harry & Snowman and Unbridled, and many foreign subtitle films and documentary shorts were submitted as well.

The weekend of festivities concluded with The Winnie Awards, and evening fashioned as “The Oscars of the Equestrian World” and Reflections was thrilled to receive the People’s Choice Mini Winnie Award award for top film under 15 minutes!!

The entire weekend was a wonderful way for Ocala Horse Properties to join our friends Kim, Christian and Ting Oliver (Edge Equestrian) in celebrating the Marion County community’s support of Horses N Heroes.

HITS Ocala
December 12th-13th and 19th-20th
Our fabulous area show is supporting the girls from Horses N Heroes by sponsoring their entry fees at two of their local shows over two consecutive weekends.

Edge Brewing Barcelona Beer Launch Party
December Date TBD
A “Tap Takeover” at Infinite Aleworks in downtown Ocala where guests can taste the full line of beers available in the US, including the new Equestrian Line.

Thriving in the ‘The Horse Capital of the World’

Ocala Horse Properties salutes the team at Edge Equestrian and Horses N Heroes for their efforts in building a family based community, which is thriving in the ‘The Horse Capital of the World’.

During the week of the Nations Cup in February, Ocala Horse Properties will be hosting a party in conjunction with Edge Equestrian to benefit Horses N Heroes.

The team at Ocala Horse Properties is passionate about their town and this cause. “We want to do something that will showcase the Ocala-lifestyle and community that we enjoy so much during one of Ocala’s premiere international events, The Nations Cup.”

But the most important element is in the spirit of giving back. “We are hosting an event to support an Ocala based charity that we can really get behind. We couldn’t believe that an organization like Horses N Heroes existed in our own backyard that we knew nothing about it! We want to change that by helping to bring awareness to this local Ocala charity.”