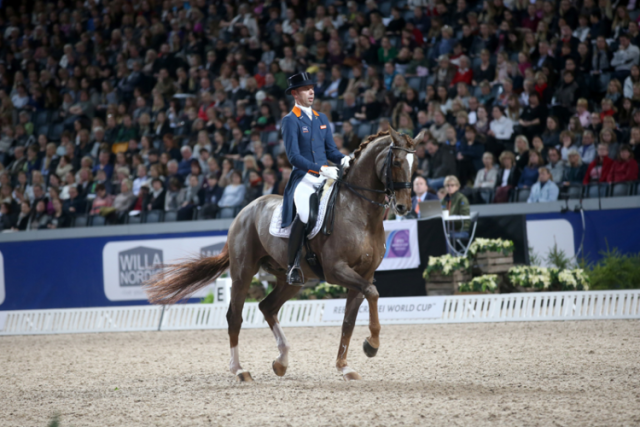 Hans Peter Minderhoud of the Netherlands captured a big win in Stockholm, Sweden over the weekend at the Reem Acra FEI World Cup Dressage Western European League Qualifier, piloting the 14-year-old Glock’s Flirt to a score of 80.950. The pair’s freestyle dance to themes familiar from fans of the Zorro films included just one small bobble in an otherwisse stellar performance.

Minderhoud had already won the previous day’s Grand Prix test with Flirt, and commented in an FEI press release that “this is my first qualifier win with Flirt, having competed him for one and half years. He is very easy to travel with, so I can take him everywhere. Flirt is getting closer all the time, who is my best horse is really depending on the form of the day.” Minderhoud’s top horse is Glock’s Johnson, with whom he won a team gold and individual bronze at the European Championships in Aachen.