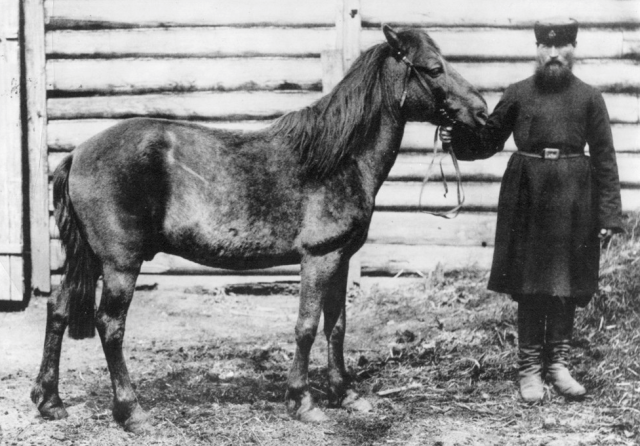 This week we list the members of genus Equus no longer with us.

Chinese statuary and paintings show these horses with legs that were proportionally short, powerful crests and round barrels. The forelegs of the Chinese depictions are very straight. According to tradition, these horses sweat blood. Modern scientist believe that the blood-sucking parasite, P. multipapillosa, caused sweat to get mixed with blood when the horses were worked. Regardless, they were the most sought after horses of their time. The Han imperial regime required Ferghana horses and imported such great numbers of them that the rulers of Ferghana closed their borders to such trade. That move resulted in a war that China won.

The Narragansett Pacer was the first horse breed ever to be engineered in the United States, derived from British and Spanish stock shortly after the Revolutionary War. The Narragansett was described as small, 13.2 to 14.1 hh on average, commonly sorrel and distinguished by a pacing gait. They were hardy, sure of foot and easy moving horses. They were judged even at their time to be “not very handsome, but good,” plain in their form and low in their carriage. It is said that both Paul Revere and George Washington rode a Narragansett Pacer. Unfortunately, the horse fell out of style and the breed was depleted by export and interbreeding. The Pacer hasn’t been seen since the late 19th century, but some of its genetic material persists in the Tennessee Walking Horse and the American Saddlebred.

“His limbs are strong, and well knit together; his pace is lofty, and he is very docile for the performance of any exercise; but a nice eye may discover that his legs are something too small, which seems to be his only imperfection.” – 1800 edition of The Sportsman’s Dictionary. The Neapolitan was bred in Italy and practically a celebrity in literature from the 16th to the 19th century. The horse fit the Baroque mold. The body was deep and broad but short-backed, with round hindquarters and a crested, powerful neck set on high. The breed declined in the 20th century, but was strongly incorporated into others such as the Lippizaner and the Napolitano, still found in Italy.

The breed was first established in Norfolk, England. The most influential sire in its history was the half-bred stallion Shales (foaled 1755), a descendant of the Darley Arabian, one of the three foundation sires of the Thoroughbred. The horse was an all-around travel horse, known for its ability to carry a heavy man for great distances at speeds up to 16-17 mph. The breed was imported to America in 1822, becoming a major influence on the Standardbred.

During the time of the Norman Conquest in 1066, the conquerors took some of the horses from Europe and crossed them on native mares. Eventually, a distinct type evolved that was known as the Old English Black Horse. Despite the name, the horse came in bay, brown, roan, grey and chestnut coat colors. Four white stockings and a well-defined bald face were highly desired. The Old English Black Horse became extinct through interbreeding, but heavily influenced the bloodlines of the Clydesdale and Shire.

The Quagga was a sub-species of the Plains Zebra that lived in modern South Africa and was hunted to oblivion by Boer settlers. The Quagga was extinct in the wild by 1878 and with the last known one dying in an Amsterdam zoo in 1883. It was distinguished from other zebras by its limited pattern of primarily brown and white stripes, mainly on the front part of the body. The rear was brown and without stripes, and therefore more horse-like. In 1984, the Quagga was the first extinct animal to have its DNA analyzed. The Quagga Project is trying to recreate the phenotype of hair coat pattern and related characteristics by selectively breeding Burchell’s zebras.

This species was native to the Arabian peninsula. It was the smallest form of Equidae and was known for being untameable. Its coloring changed with the seasons—a tawny olive coat for the summer months and pale sandy yellow for the winter. It was compared to a Thoroughbred for its beauty and strength in early literature. European travelers in the Middle East during the 15th and 16th centuries reported seeing large herds. However, its numbers began to drop during the 18th and 19th centuries due to overhunting and its existence was further threatened by World War I. The last known wild specimen was fatally shot in 1927 at Al Ghams near the Azraq oasis in Jordan and the last captive specimen died the same year at the Tiergarten Schönbrunn, in Vienna.

“The color of pure tarpans was described as constantly brown, cream-colored or mouse-colored. The short frizzy mane was reported to be black, as were the tail and legs. The ears either were of varying size, but set up high at the skull. Tarpans made stronger sounds than domestic horses and the overall appearance of these wild horses was mule-like.” – The Natural History of Horses by 19th-century author Charles Hamilton Smith. These horses were hunted primarily for their meat and pelts. The last individual believed to be of this subspecies died in captivity in Russia in 1909.

Only known photo of an alleged live Tarpan, which may have been a hybrid or feral animal, 1884.

This was an Oriental horse breed from the steppes of Central Asia. They influenced many modern breeds, most notably the Thoroughbred and Akhal-Teke. The Turkoman horse was noted for its endurance. It had a slender body, similar to a greyhound, a straight profile, long neck and sloping shoulders. Their back was long, with sloping quarters and tucked-up abdomen. They had long and muscular legs. The horses ranged from 15 to 16 hh. The coat of a Turkomen horse could have been of any color and usually possessed a metallic glow. Primarily bred for racing, the mares were kept in semi-wild herds that had to defend themselves against the weather and predators. Colts were caught at six months when their training began. There is some controversy on whether Turkoman or Arabian breeding is more responsible for the infamous Byerley Turk, although its longer back evidences Turkoman ancestry.

The Byerley Turk, one of the progenitors of the Thoroughbred breed, may have been a Turkoman horse.