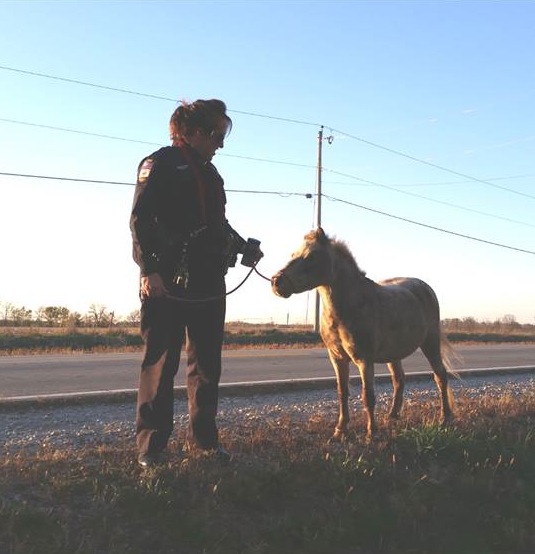 Monday is the crappiest day of the week, so it only makes sense that we make things official.

A helpful officer and Sid Vicious.

Today, reader Leah Ried is sharing her “Oh Crap” story of when her three-year-old daughter’s pony Sid Vicious decided to take himself on a tour of the neighborhood. (We’ve featured Sid before in this so-cute video — now it’s time to see his not-so-cute side.)

Well, this weekend my husband is on a trip to California, my daughter Brooklyn is on a weekend trip with Papa and I’m six months pregnant with the house to myself! Lots of leisure time for mom, right? So I’m working away on laundry and I glance outside to find my 30-year-old 36″ miniature pony IN MY BACK YARD! Now, Sid is a special little guy, I swear he’s proud cut. NO ONE can catch this little turd except for my 3 year old daughter.

Since we’re moving very soon I have packed EVERYTHING except two saddles and a pair of reins. So I grab the reins and sneak out the back door. My sneak wasn’t sneaky enough: Sid spots me, gives me a wink and bolts off across the highway. A 2015 Range Rover swerves to miss him, jumps out and asks me if I need help. Through the tears and the hysterical pregnancy-induced hormones I shout “YESS!”

Sid takes off in a full Seattle Slew dash across a corn field and smack dab onto a major four-lane highway! Good Samaritan “Tim” in the Range Rover peels out and cuts Sid off just before he gets to the highway, sending him back towards the cornfields and away from eminent death! (Thank you TIM!!!) I, six months pregnant, not all ALL dressed for a public appearance, call 911. Within minutes the cops arrive and the chase is on!

Three city officers and a county deputy and myself spent two hours just trying to keep up with this 30-year-old toothless 36″ pony! At one point the Sheriff’s Deputy took his cruiser through the ditch and tore through the empty corn field behind Sid. It was like a scene from a movie! Cops on a high speed chase through a corn field after a little snot-head pony. Finally I waddled back to the house, found a feed bucket and got close enough to toss a rope around his neck.

The officers were kind enough to lead him for me the remaining two miles to the barn and let me ride in the cruiser. With her permission I snapped a quick picture of my juvenile delinquent and we laughed about the “charges” he had racked up: trespassing, evading arrest, high-speed chase, resisting arrest, assaulting an officer … in Sid’s defense his fingers did look like treats.

After it was all said and done Sid was back in his pasture and pacing the fence looking for another escape route.