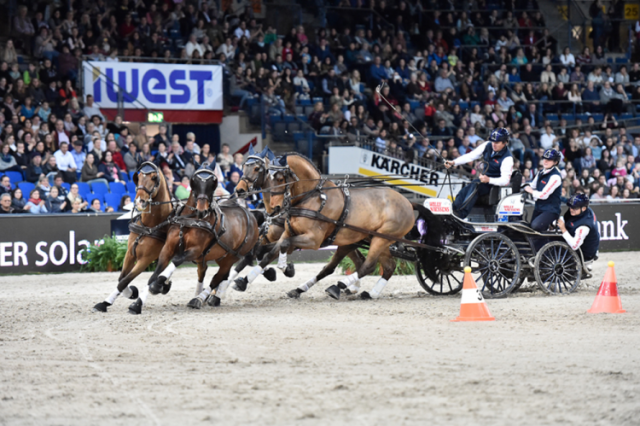 The undisputed king of indoor driving, Boyd Exell blew away the competition in the first leg of the FEI World Cup series, held in Stuttgart, Germany.

The 2015-2016 FEI World Cup Driving season kicked off on Saturday, November 21 in Stuttgart, Germany, and the crowd was treated to the ultimate spectacle of Boyd Exell running away with the victory. Coming into the final drive-off round, Australia’s Exell was already in the lead by a healthy ten-plus seconds over Ijsbrand Chardon of the Netherlands and Rainer Duen of Germany.

Before we watch the replay of Exell’s drive-off round, let’s pause to discuss a few points about indoor driving as a spectator sport in Europe:

Okay, now that we’ve made it perfectly clear that indoor arena driving may be just as much fun as your conventional American ball game, let’s check out Exell’s final run:

Ah, nothing like drifting your carriage around the corners to really drive home the point. When the dust settled, Exell had captured the victory with an astounding thirty-second lead on his next fastest competitor! That’s a great way to kick off another indoor season.