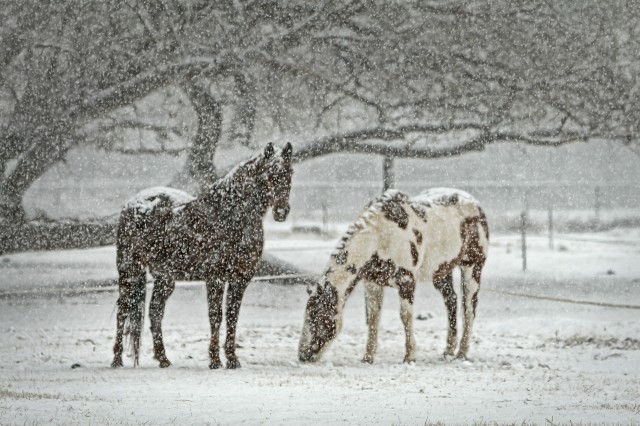 This week, we’ll be discussing a few weird but true winter conundrums.

It’s not the dropping temperatures that cause horses to grow winter coats.

Researchers at Texas A&M University tested the theory that exposing horses to “extended daylight” would stop fall hair growth or cause early shedding. The experiment was conducted on yearling and two year old horses randomly assigned to two groups. The ED (Extended Daylight) group received 16 hours of light per day and the NED (Non Extended Daylight) group received only natural daylight from October 1 to December 6. All horses were kept in a non-heated barn and none of the horses were blanketed.

Hair growth remained similar between the two groups the first month, but by December the hair of the NED group was almost three times longer than the hair on the ED group.

Researchers also discovered no special lamps were needed to achieve this effect, meaning you can use standard incandescent or fluorescent light bulbs. Researchers suggested using a minimum of “10 foot candles” of light — geek speak for a 200-watt bulb.

Mares under lights will continue to come into season during the winter, and stallions exposed to artificial lights will result in an earlier breeding season. If mares are to be bred in late summer, however, an artificial lighting program could cause the stallion to peak too early.

Horses warm themselves during winter months via digestion.

Heat is released when microbes in the gut digest food via fermentation. The process occurs in the cecum and large colon. Research shows high-fiber feeds like hay or beet pulp produce more heat than low-fiber grain, such as corn.

The Horse had these recommendations, “For each 10-degree change below 30′ Fahrenheit, horses require an additional intake of approximately 2 pounds of feed per day, assuming the feed has an energy density of 1 megacalorie per pound, which is typical for most hay. A 10- to 15- mph wind will require horses to consume an additional 4 to 8 pounds of hay … When a horse without shelter encounters both wind and wet snow at 32’F, the animal must consume an additional 10 to 14 pounds of hay.”

Hair is also composed mainly of proteins, so poor nutrition can have a significant effect on both the quantity and quality of hair growth.

Piloerection is the ability for hairs to stand, or “puff,” up. This process aids thermoregulation and is controlled by a small muscle associated with every hair follicle. Piloerection increases the insulating factor of the hair coat by increasing the air content within the hair coat and therefore the skin and the environment. It’s like putting on a down vest.

This is one of the major points in the argument against blanketing. If the horse has a normal full winter hair coat, blankets that fit too tightly could prevent piloerection.